This afternoon, I had a weird encounter with a gosling at work. At first, it was sitting in a grassy area, not making a peep, and its parents were nowhere nearby. It made no move as I approached it, then walked past it on an errand. On my way back from the task at hand, it started to peep, and I approached very closely to inspect it: 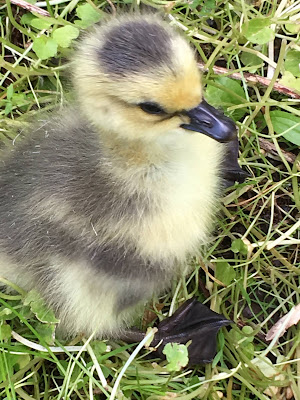 The gosling was mobile, but it had a galumphing gait which suggested a minor leg injury. Oddly, the parents didn't mob me when I leaned over the little critter, suggesting that maybe they knew it was injured and would concentrate on guarding their other offspring. Eventually, as I receded from the vicinity of the wee birdie, they approached it and proceeded towards the water with it. I had never gotten so close to a gosling without its parents going completely bonkers, and I am still wondering why such an occurrence happened.

I can't illuminate on the lack of reaction by the parent geese. As you say, usually they're pretty aggressive when protecting their nests and young. My personal experience has been that geese instinctively go for the crotch whenever they're riled.

But I can offer some insight on the behavior of the little guy. Unlike baby ducks and chickens, geese start out life fairly helpless, being nestbound for the first week or more of their lives. Your little guy probably had recently left the nest and wasn't yet very steady on her feet. If momma got her to the water she's passed the first hazzard of her short life. There will be many more to come if she makes it to adulthood.

I hope Big Boppa is right. That is a beautiful little being, and arouses the parental in me, as it no doubt does in you.
Driving along a well-wooded 2-lane local road here in central-northern NJ the other day, I saw a Canada goose family group on the grass verge: one parent grazing, the other with head alert assessing the passing cars, and about 4 goslings sitting quietly beside the first parent. I think they were considering crossing the road. The goslings looked a bit older than your baby.

I think the little gosling will be fine. The parents did come get it, after all.