On Friday afternoon, I got a glimpse of a 'showdown' between representatives of the two great endothermic terrestrial animal lineages... put in normal person terms, a woodchuck got into a standoff with a family of geese: 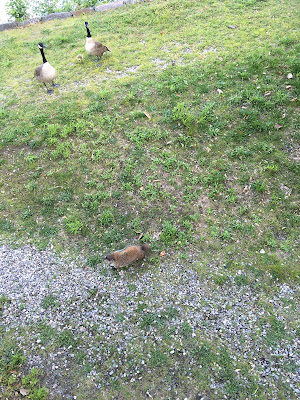 This showdown was preceded by a tiff between two woodchucks, with one chasing the other right past the geese until the pursuer set off the parenting instinct of the adults. Confronted by two hissing theropod dinosaurs, the large rodent decided to beat a hasty retreat.

I had the advantage of being on a raised porch above this particular fray. I doubt that the woodchuck would have approached the vicinity if I had been at eye level.

Hello Everybody,
My name is Mrs Sharon Sim. I live in Singapore and i am a happy woman today? and i told my self that any lender that rescue my family from our poor situation, i will refer any person that is looking for loan to him, he gave me happiness to me and my family, i was in need of a loan of $250,000.00 to start my life all over as i am a single mother with 3 kids I met this honest and GOD fearing man loan lender that help me with a loan of $250,000.00 SG. Dollar, he is a GOD fearing man, if you are in need of loan and you will pay back the loan please contact him tell him that is Mrs Sharon, that refer you to him. contact Dr Purva Pius, call/whats-App Contact Number +918929509036 via email:(urgentloan22@gmail.com) Thank you.