And You Think Your Dog Has It Rough

My principal workplace is pretty marshy, a small tributary of the mighty Hudson flows through it, and expands into a pond. There is a low-lying reedy area where the tributary meets the great river. Yeah, it's pretty much a marsh.

My main reason for this preamble is to establish that we have frogs and bugs in profusion. Early July is the mating season for the bullfrogs and fireflies onsite, so observable mating rituals are a feature of every night. The Fourth, with its loud pyrotechnic display, must play hob for these poor critters. Some poor bullfrog is crooning his heart out, hoping to attract a sexy lady frog, and the booms of the fireworks drown out his love song. Some poor firefly is blinking his ass off while the potential love of his life flies off toward a distant starburst.

The Fourth of July is one big zoological cock-block!


We hold these truths to be self-evident, that all men are created equal, that they are endowed by their Creator with certain unalienable Rights, that among these are Life, Liberty and the pursuit of Happiness.


Offer not valid if you're not a White guy... Frederick Douglass was keenly away of this hypocrisy.

With the preponderance of continual Black Lives Matter protests occurring across the nation, I have been thinking about what the American Revolution actually meant, and came to the conclusion that it wasn't a true revolution, and that the country which resulted from the success of the revolt merely continued a colonial regime under 'new management'. In vast swathes of the country, the social order was akin to feudalism, albeit lacking the complex web of obligations that the feudal system embodied. For many residents of the United States, the American system of the eighteenth and nineteenth centuries was actually a 'step backwards' from the typical society of the Middle Ages.

Seeing the protests, which are countrywide, and enduring, I am envisioning a genuine Revolution, one which will result in the adoption of the lofty ideals of the American Experiment for ALL residents of These United States. What are the protests besides a list of grievances such as those enumerated in the Declaration of Independence? What is the suppression of Black votes but an example of Taxation Without Representation?

The Declaration of Independence was written at the onset of the Revolutionary War, and was followed by a period of violence, privation, and uncertainty. I don't believe that the current situation is as frought as those uncertain years, but things could get uglier. Hopefully, the decent people of the country will assert themselves in November, revolt against the White Supremacist Oligarchy, and put into place a government which applies the premises of the Founders, such brilliant but such flawed men, universally. It's time to shed our centuries of post-colonial malaise and unite to form a mature society, that More Perfect Union enshrined in the United States Constitution.

The Female of the Species is More Chunky than the Male

A couple of nights ago, I was working in a building without glass panes in its doors, and I left the main door ajar so I could keep one eye on things outside. This was a bit of a mistake, as several insects, attracted by the light, decided to enter the building to flit about. Among the flitters was a clumsy flier, a beetle as long as my pinky finger. This sucker would actually clatter as it hit an occasional wall. I got a decent picture of it when it finally landed: 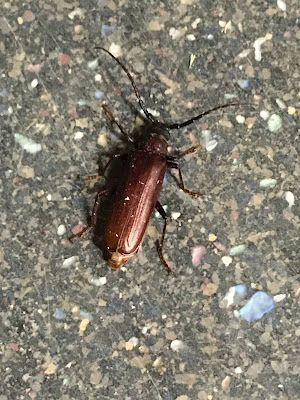 As far as finger-length, reddish brown beetles in New York State go, there are two candidates, and I was immediately able to rule out one of them. The remaining bigass beetle local to the area Broad-Necked Root Borer (Prionus laticollis). The female Broad-Necked Root Borers are too chunky to fly, being about twice as massive as the males. Also, the lack of the prominent yellow ovipositor is a dead giveaway that this clunky flier was a boy.

I ended up turning off the lights in the building when I went on my tour of the facilities, which led to my insect companions, both competent fliers and this guy, to leave for the brighter environs of the streetlights, about one hundred meters away.

Posted by Big Bad Bald Bastard at 9:01 AM 0 comments

To my dismay, when I arrived at work tonight, I discovered that our internet service is not available. I suspect that we had a brief power outage which knocked our server offline. Tomorrow morning, I will have to text my boss to let him know that our email and scheduling programs are inaccessible. Luckily, our self-reporting payroll submission took place last week.

I will try to set up some posts at home tomorrow, in case the IT guys can’t get the server online tomorrow. They will probably text instructions to our work cell phone to walk us through the process of resetting everything. If we don’t have Internet, it’s no big deal, I need to calculate my taxes for last year, which should kill a few hours that I’d usually spend snarking online.

It's Astounding, Time Is Fleeting

2020 has been a bizarre year, to be sure. One of the standard jokes early in the year was that April had about seven-hundred days. That was back in the shutdown stage, when every day blended together into an amorphous timeblob. Supermarket shelves were pretty bare, so even eating involved throwing a bunch of stuff in a Dutch oven and keeping a perpetual stew going on the stove. I was lucky, in that my work schedule was never disrupted, though the seasonal influx of coworkers. contractors, and visitors never materialized. Even now, I'm pretty much in 'Winter Mode' on the job, stuck without having to perform the weekly ritual of opening the place up for the day and greeting the incoming 'day people'.

June, on the other hand, was pretty much 'blink and you'll miss it'. The individual days aren't that different, but favorite restaurants are now open for takeout and, if possible, open air dining. I've been able to get together with friends that I hadn't seen in person since March (though we've been good about using platforms such as Zoom and Discord to chat, and even get a weekly board game going). The routine of work has been leavened by the influx of new faces, and the mere fact that the daylight hours are longer, affording more of an opportunity to see the critters that have adjusted to the new 'less-human' normal. I'm still in denial about it being July already.

Post title taken from this classic number and its associated dance.

Ten Years on the Job

Today is a very special anniversary, the tenth year of one of our star employees. No, not myself, my fourteenth anniversary is in August. I'm talking about my beloved Ginger, pictured here in her rookie year: 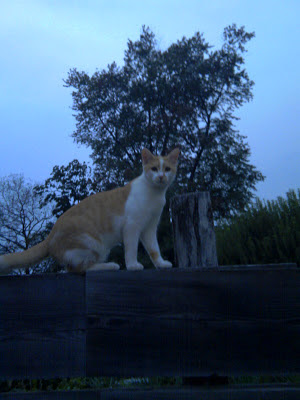 Ginger was a package deal with her brother Fred, who we lost to cancer three years ago. Here's a picture of the two in happier times: 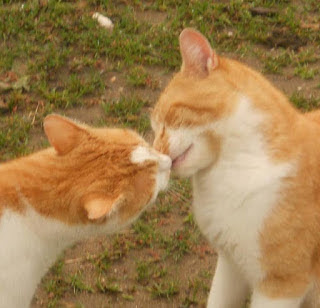 Fred and Ginger were given to us by a former site manager who takes care of feral cats in her neighborhood. When one of her ferals had a litter of kittens, she knew that the place would be a perfect spot for two cats to live well, and to live usefully as our Rodent Abatement Team. The fact that we are staffed with cat lovers only sweetened the pot.

Ginger is currently on furlough due to the 'rona, she's staying with one of our managers, who has been with her from the start... he was the one who transported them from the home of their original benefactress, and is usually the one to take our cats for their veterinary checkups. I haven't seen the dear girl since March, but get regular updates in how she's doing. Hilariously, she gets put on a leash and taken for walks, which I find hard to believe (here, she has the run of a twenty-five acre property for most of the day, before she works her building all night).

In a few minutes, we are having a Zoom 'conference' to celebrate Ginger's anniversary. I haven't seen most of my coworkers in way too long, due to COVID-19 furloughs, so it's going to be a nice reunion all around, as well as a celebration of a beloved, and valued, coworker.

The opening to Peter S. Beagle's The Last Unicorn has a lovely description of the titular critter, from which I will extract a relevant passage:


She did not look anything like a horned horse, as unicorns are often pictured, being smaller and cloven-hoofed, and possessing that oldest, wildest grace that horses have never had, that deer have only in a shy, thin imitation and goats in dancing mockery.

While Mr Beagle's prose is lovely, and he is capable of wrenching at his readers' heartstrings, he really needs to get acquainted with These Deer These Days. I mean, shy doesn't even enter into the picture, by which I mean this picture: 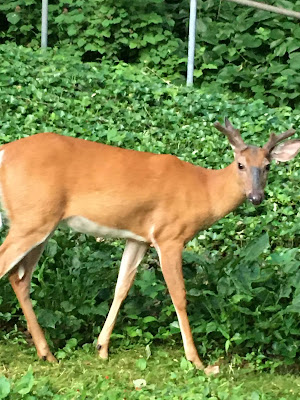 It's not any different at night... I was walking the property and saw that someone had, oddly, left a sawhorse near the main footpath... it took a while to realize that the sawhorse, while remaining stationary, was a bit too diaphanous. It took a while before the deer, and its buddy (I can recognize three of them on the property, a doe, a young stag, and a larger stag with a partially broken antler) even considered moving from the delicious apple tree foliage they were browsing on: 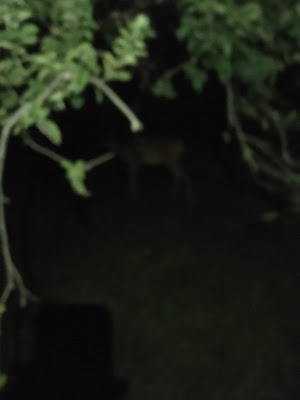 I'm starting to suspect that a speciation event has occurred, and that this population of Odocoileus virginianus has evolved into Odocoileus impudicus. Pretty soon, they'll be sauntering up to me to root for muffins in my lunchbag.