On Tuesday evening, I headed down to the beautiful Bell House, in the Gowanus section of Brooklyn, for this month's Secret Science Club lecture, featuring social psychologist Dr Daniel Yudkin of Yale University’s Crockett Lab. The topic of Dr Yudkin's lecture was the development of the moral mind, specifically the growth of third party punishment to regulate behavior.

Dr Yudkin began his lecture by recounting Damon Dash's statement that he wanted to slap Harvey Weinstein because of his maltreatment of women, noting that this is a great topic of study for psychologists. What underlay Mr Dash's desire to punish Mr Weinstein- he was not directly affected my Mr Weinstein's misconduct, but he couldn't look the other way. This phenomenon is known as third party punishment- when A harms B, and C, who isn't directly affected, punishes A. This behavior is rather more common than most people think. Individuals often protest on others' behalf, usually out of a deeper feeling about justice. This often serves to make society more fair.

Our behaviors are the result of evolution... more fairness is thought to increase the ability of humans to cooperate over long periods of time. While individuals may have an incentive to take more than their fair share, interventions to maintain fairness maintain a fairer distribution of resources. One motivation for this behavior is reputational, acting fairly makes oneself look good. Another motivation is true justice, when individuals truly care about bad behavior. The issue faced by psychologists is how to distinguish between these two behaviors. Dr Yudkin took a developmental approach. There are advantages to studying children- they are more gullible than adults. The development of reputational concern occurs over several years, at about five years of age, children start to care about their reputations. Third party punishment is a product of reputational care.

Dr Yudkin developed an experiment, an experiment which had to be comprehensible to children in which the children had to exact a costly punishment in order to ensure personal investment. The experiment was conducted with a play group of children in a museum, consisting of two hundred children of diverse backgrounds, ages three to six. The children were first allowed to play on a slide, then they were instructed to draw a picture for a book, then they were told a story about two participants- one of whom was asked by the other to guard the picture shed had drawn. In a video shown to the children, the girl tasked with guarding the picture destroyed it, which created a sense of outrage. The subjects were then given a choice to punish the bad girl by disallowing further use of the slide by everyone- they could punish the malefactress, but at a personal cost. The experiment tested assumptions about punishment, conditions of transgression and compliance were created. When there was no transgression, 0% of the subjects chose to close the slide down, but in conditions of transgression, 60% of the subjects closed the slide, a strong confirmation of the basic assumption about third party punishment. The children were asked for a verbal explanation of their choice, and 77% of those who closed the slide mentioned bad behavior. Those who chose not to close the slide explained their decision by stating that they had a desire to go down the slide.

Age affected the results- only 25% of 3-4 year olds closed the slide, while 60% of 5-6 year olds closed it. The 3-4 year olds tended to act out of a true justice motive, they were not worried about their reputations. Children have a sense of justice, they are willing to punish rule breaking. Protest isn't just about virtue signalling. Dr Yudkin quipped about the typical misogynist's feelings about men who attended the women's marches: "How many beta males are attending the Women's March just to get laid?" He countered by stating that most of the participants genuinely cared about women's rights.

Dr Yudkin also tested for the role of group membership in the meting of third party punishment. For much of human history, close knit communities competed for scarce resources, leading to tribalism, an Us vs Them dynamic. This tribalism can be based on nationalism or religious affiliation, as Dr Yudkin illustrated with the famous Rabbit God/Duck God cartoon: 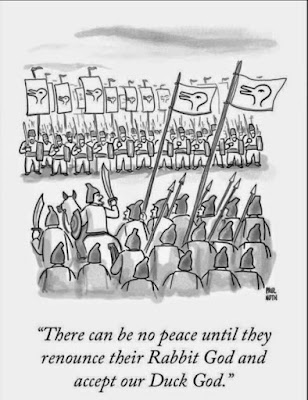 Leadership might evoke a desire for fairness. The roles of leadership and responsibility were tested by giving certain children sheriff's badges and telling them that they were in charge of the group. Approximately fifty percent of the children took these symbols seriously. The 'sheriffs' tended to punish the in-group more than the out-group, they were more invested in policing their own community. While children demonstrate the beginning of out-group discrimination, a sense of leadership can mitigate or even reverse discrimination.

Dr Yudkin then tested the role of political formulation in third party punishment. Parents were asked whether they identified as very liberal, somewhat liberal, somewhat conservative, or very conservative. The experiment being conducted on Manhattan's Upper West Side, these results were somewhat skewed... He then gauged the relationship between parental politics and children's behavior. At age 3-4, the relationship between parents' politics and children's behavior began to emerge. The children of liberal parents tended to punish in-group members more, and possession of a badge did not change this significantly. The children of conservative parents tended to punish out-group members more and badge bearers tended to punish more often. The children of liberal parents were more attuned to fairness and care, while the children of conservative parents were more attuned to loyalty, authority, and purity. The conservative-leaners were more lenient with the in-group, had a stronger sense of Us vs Them, and a stronger emphasis on authority.

Dr Yudkin presented the audience with several takeaways: Altruism isn't just about doing good for others, it is also about protesting injustice. Humans are capable of acting on 'true justice' motives. Outgroup discrimination emerges at a young age, but leadership can mitigate it. Political differences emerge at a young age- different moral foundations emerge, as if different moral 'lenses' lead to different views.

The lecture was followed by a Q&A session. Some bastard in the audience asked about the specter of radicalization later in life (I used to believe in women's equality until I was red-pilled by some cartoon frog memes). Dr Yudkin chalked this up to a product of the Nature vs Nurture divide, while parents can model certain attitudes for their children, Nature probably plays a large role in one's moral attitudes. Conservatives have been shown to have strong disgust responses than liberals tend to have. Another question involved our closest relatives- regarding chimpanzees, while chimps and humans have many common behaviors, Dr Yudkin stated that third party punishment has not been observed among chimps. Regarding true justice motives, it's not known whether these are a result of observed behavior or a deep seated desire.

Dr Yudkin delivered a thought-provoking lecture, one which was grounded in his experiment, so I didn't have to hunt down various links around the internet. The one important link here is to a video concerning his experiment: that bad girl looks like she's having a blast destroying that picture! Once again, the Secret Science Club served up a fantastic lecture- kudos to Dr Yudkin, Margaret and the traveling Dorian, and the staff of the beautiful Bell House. It was the sort of night when a guy would brave the storm to see some SCIENCE!!!