I just wanted to put up a quick post after a long day of hanging out, goofing off, and eating leftovers.  First, I wanted to post a picture of Trick or Treat, a perfect Halloween cat.  I first met 'Tricky' as a kitten, when I visited my brother and the family in Italy while he was stationed there.  This tiny little black kitten was sleeping in the middle of the bed that had been prepared for me in the guest bedroom.  He's bigger now, a solid 18 pounds, and as I said, a perfect Halloween cat: 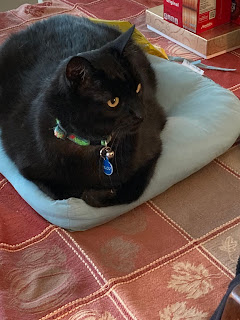 And then there's Lupin, my goddaughter's 90 pound Belgian shepherd.  She wanted to get as 'wolfy' a dog as she could find in the shelter, and Lupin fit the bill: 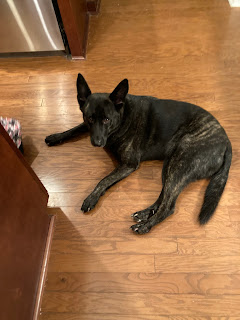 As soon as he saw me, he went berserk, jumping up on me and covering me with slobber.  Tonight, before we went out to a nice restaurant to celebrate Vin's birthday, he coated my entire head in slobber, despite my telling him, "If you want to kiss me on the lips, you'd better buy me dinner!"  So far, he only stole one of my socks, once... I honestly feel flattered that he finds me so fragrant.  Honest.  He's a goofball, and very popular in the neighborhood, among both two and four-legged inhabitants.  I met a bunch of his friends as I tagged along on walks with this dog.  My goddaughter chose wisely, though I know she really wanted a dragon, and had to settle on a dog, albeit a wolfy one.  Oh, well, we're still working on our unholy plan to genetically engineer dire wolf/corgi hybrids to unleash an army of terrifying dire corgis on an unsuspecting world.

Every Corgi I've ever known thought they were a dire wolf ...

It's not easy to work as a herder.