Ain't Never Done No Caturday Before

This gorgeous little beastie, sitting in a shelf in the employees' lounge, is my co-worker Ginger, who you must love. I've always been partial to marmalade cats, but I'd describe Ginger more as a Creamsicle cat: 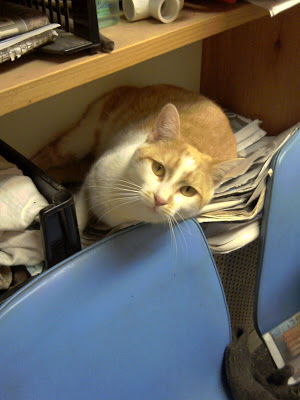 I particularly love this picture, taken in failing light with my 2.0 megapixel phone camera. It's perhaps the best picture I've ever taken with such a limited camera- it captures a particularly sweet moment in time, and the combination of color palette and subject matter is gorgeous: 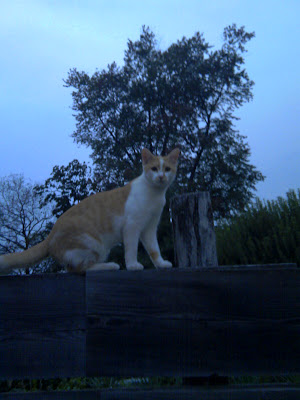 Ginger's brother, Fred (what were you expecting? I didn't name the cats, personally I would have named them Mog and Mamog), also works with me. While he is a handsome, handsome beast, he's not as photogenic as his sister, because he always "muffs up" the shot: 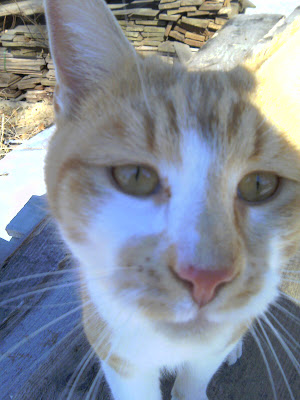 These two are my constant companions. Fred, in particular, follows me around like a dog. One night, he stayed with me throughout a quarter-mile walk from one end of the site to the other. One of my co-workers, seeing my orange and white shadow, had to comment, "Man, that cat loves you."

Just to prove that I am not passing off one cat twice (with the judicious application of some orange hair dye), here's a picture of Fred and Ginger doing their best impression of The Gates: 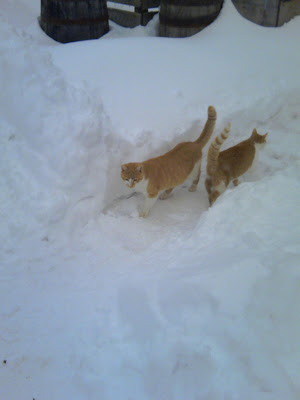 Wow, my first Caturday... it was nice, but, somehow, I thought it would be more special.

NOTE: While I had been planning on posting these pictures of my feline friends for a while, the final motivation for posting them today was this awesome local cat story.

I've told them on several occasions, "For pity's sake, kill that little critter quickly and cleanly, you fiend!"

I hitched them to a little plow- they're a yoked team.

Double Caturday at my place.

And yes, that cat on my deck DOES bring me presents. At least, I'm the one that has to clean them up.

One of my co-workers, seeing my orange and white shadow, had to comment, "Man, that cat loves you."

See, I knew you was good people, BBBB.

Those photos--and the cats--are incredibly cute. For a novice Caturday-er, you did splendidly. *polite applause* :)

I better get back to Weekly Jack.

I don't do Caturday, but these two are cute enough.