Ending the Week on a High Note

This week has been, to put it mildly, bad. I have a friend who is dying by inches, and spent most of the week rasping and wheezing with laryngitis and a chest cold. I managed to beat the cold, and my voice is largely back. Today was the last day of the current semester of my volunteer gig. Twenty weeks of coaching has drawn to a close, and we had a nice luncheon and awards ceremony to close the program.

We only had two classes, rather than our usual four, so we spent some time cleaning up our locker room, and putting in order the displays that we will be setting up for April's New York Open Judo Tournament. It was an hour of tidying up, of assembling frames and support devices for posters and banners. We also emptied the bin that we keep the kids' gis in, and I gave it a quick wash. We will be sending the gis to a commercial laundry service for a much-needed cleaning.

We then had a ceremony for awarding new belts to our students who passed their promotional tests two weeks ago. We took turns placing a belt on a student, and then gave them the customary 'throw' for good luck. I have a running joke with the student I had to fight two weeks ago, an adorable six-year old- she seems to have a mental block regarding the pin known as kesa-gatame.

For the record, she has the technique down pat:

At the luncheon, I had a nice conversation with her mom, who told me that she is totally obsessed with judo, and wants to practice every day. It's a sport that she has chosen without any pressure from her parents, who have her enrolled in a dojo where one of my colleagues works. Besides judo, she's a STEM girl through-and-through, she likes robotics and her favorite toy is a model of a car engine which she has been putting together. I knew there was a reason I liked the girl! I complimented her parents on raising her well, she has flawless manners and is a nice, clean player, just a good sport and an opponent who helps her fellow students learn.

During the luncheon, the kids sit together, the coaches and counselors have their own tables, and the parents sit with each other. I told mom about my little running joke with her daughter, and when she came by the table, I barked, "What is the name of the technique?" After the joke ran its course, I told her mom, "When she is competing in the Olympics in 2032, I'm going to bark that question at her. When I'm an old geezer in a nursing home, she's going to call me up and yell, 'Kesa-gatame you old goat!"

Best of all, Sensei Al brought his son, who is our new judo baby. If there's anything cuter than a baby in a judo gi, I don't know what it is: 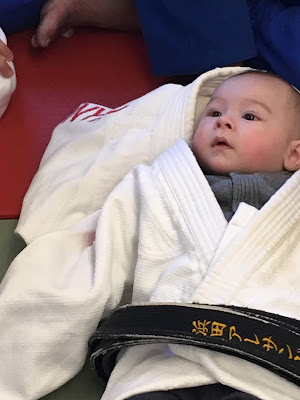 He's a looker, just like his old man. It was hilarious watching a bunch of toughs oohing and cooing over this baby, and he was a hit with the kids.

I needed a break from the stress and sadness of this week, and I found it in my typical fashion, getting beaten up by a bunch of six to fourteen year olds.