I Think We Know How This Movie Ends

One of the supermarkets in which I shop, one not far from a couple of my worksites, has a robot which rolls slowly down the aisles, detecting spills and directing custodial personnel to areas which need a clean-up. The robot is certainly not anthropomorphic, though it has been provided with a pleasant-sounding synthesized female voice... and someone has affixed a pair of googly eyes to it: 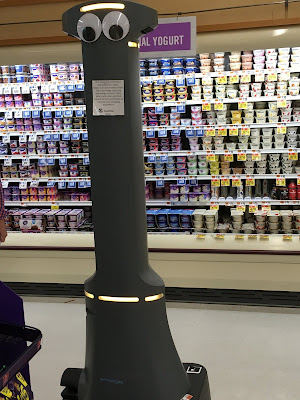 Those googly eyes are a weird touch, an attempt at drollery to lull the humans into a sense of comfort. I'm reminded of the jocular robots in Gene Wolfe's The Book of the New Sun, with their droll manner of speaking:


"SPOILER—that was his name—had a habit of speech. Whenever he had to say something unpleasant, he softened it, made a joke of it, by attributing what he said to some comic situation. The first night we were here, when I asked you your name, you said, 'I lost it somewhere along the way. That's what the jaguar said, who had promised to guide the goat.' Do you recall that?"

He shook his head. "I say a lot of foolish things."

"It struck me as strange; because it was the kind of thing SPOILER said, but he wouldn't have said it in that way unless he meant more by it than you seemed to. I think he would have said, 'That was the basket's story, that had been filled with water.' Something like that."

I waited for him to speak, but he did not."The jaguar ate the goat, of course. Swallowed its flesh and cracked its bones, somewhere along the way.""

Haven't you ever thought that it might be just the peculiarity of some town? Your friend might have come from the same place I do."

I said, "It was a time, I think, and not a place. Long ago, someone had to disarm fear—the fear that men of flesh and blood might feel when looking into a face of steel and glass."


I guess it's only natural to acclimate us to the unnatural, but this robot doesn't even come close to the 'Uncanny Valley'. I've seen enough movies, though, to know how this will end in that inevitable day when 'Spill in Aisle Seven' changes to 'CRUSH! KILL!! DESTROY!!!'

I never can tell how seriously to take posts like this.

I mean, the risk of somehow getting from "cleanup on aisle six" to "CRUSH KILL DESTROY" at this point in the technology arc are zero. Robots can't reprogram themselves, they can't arbitrarily decide to become violent, and they can't sustain themselves (they need humans to provide energy sources like batteries and line current).

So, if it's just a funny commentary based on movies, cool. If it's somehow being presented as a threat in our lifetime, it ain't that.

I'm pretty sure you are safe to assume this is light hearted comedy and not the other.

The ambiguity is a feature, not a bug!