Today was the day of the 2019 New York Open Judo Tournament. I took the day off from work to attend, because this event is 'our Woodstock'. It's the day when judoka from all over the US and the world come to New York for an intense team competition. The Polish national team won the men's gold, while the US national team won the women's gold. The Israeli team won silver in both men's and women's divisions. Here's one of my friends on the women's team, who is an Olympic prospect for next year: 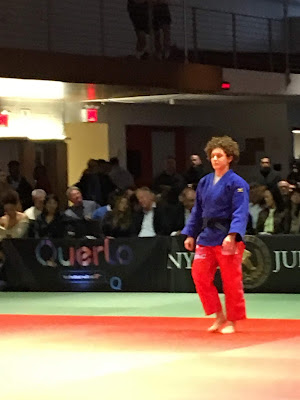 About a half-dozen of our Saturday morning students came to cheer her on, and here are the backs of two of their heads: 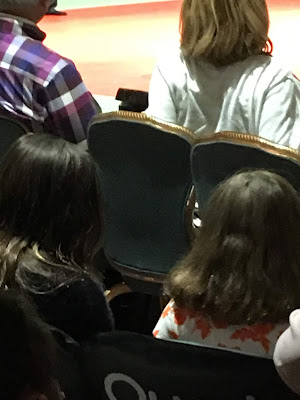 I spent much of the tournament explaining to scoring to a father of one of the students, I figure he had to know the difference between an ippon and a koka if his now-obsessed daughter continues her judo career, which I have no doubt she will. It was an exciting day, a lot of ippons, which necessitate perfect throws, were scored.

After the match, there was a lovely reception, which was accompanied by an open bar kicked off with a sake ceremony presided over by two gentlemen in luchador masks: 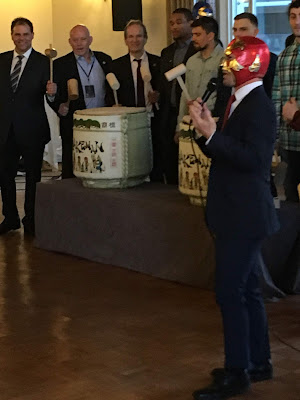 I spent much of the after party with a couple of gents from the Stanford, Connecticut dojo who I hadn't seen in a year, and the Georgian national team, a couple of whom were living in Brooklyn. I also had a nice time socializing with the German national team, whose coach had, not too long ago, been a competitor in the open.

As always, it was an international love fest, and an opportunity to see old friends. It was also a celebration of the life of Rusty Kanokogi, who we lost ten years ago. Rusty is synonymous with women's judo, and the stellar performances by the women's teams from the US, Israel, and the UK would have done her proud.

It was a gorgeous day- the fighting was beautiful, the fellowship wonderful... as always.