In the wake of the guilty verdict leveled against the Nazi creep who killed Heather Heyer, neo-Nazis are losing their shit. They have tried to portray him as an innocent victim of leftist violence, acting in self defense- they have even portrayed him as a prisoner of war. In particular, the Crying Nazi is declaring war, in the form of a Campaign of Terror on the libs: 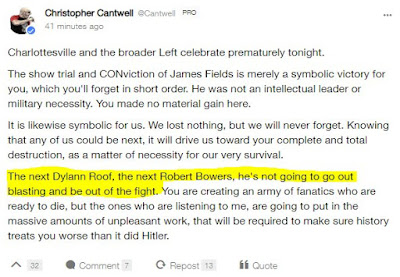 I suspect that Crying Nazi is actually working on a marketing campaign for the fascist-infested Gab platform. The management at Gab probably wants liberals to join the social network just to dunk on this asshole.

When there was all of the controversy about facebook privacy issues, I joined gab for a couple days.

I tried. I lasted less than three days.

It's not that they were all conservatives. It's that every person seemed to post solely things like the cartoon caricature of Jews all day long. It was sick stuff.

I can't believe there are so many of these people out there, but there are. It makes me sad, even though I know most of it is just anonymous bravado. As Heather Heyer's loved ones can tell you, it only takes one to put their screwed-up understanding of the world into action.

Oh, my, how did you scrub off the filth after such a dive?