Last night, I headed down to the beautiful Bell House, in the Gowanus section of Brooklyn, for this month's Secret Science Club lecture featuring Dr Chad Orzel, of Union College's physics and astronomy department. Besides teaching at Union College, Dr Orzel has written science books for the general public, including How to Teach Physics to Your Dog and his newly released Breakfast with Einstein: The Exotic Physics of Everyday Objects. Last night's lecture riffed off of Breakfast with Einstein, the central trope of which is an exploration of the role of physics in a typical American's morning routine.

Dr Orzel began his lecture with a declaration- you may thing that quantum physics is weird and exotic, remote from everyday life. This is a self-inflicted wound on the part of physicists, with even popular science writers publishing books with words such as 'enigma' and 'puzzle' in the title. Physicist Niels Bohr notably said: "Anyone who is not shocked by quantum theory has not understood it." Dr Orzel quipped that scientists inhabit the same world that everyone else does- they glean clues from everyday objects. He started with breakfast, specifically the glow of the heating elements of an electric toaster. The color of the glow is not dependent on the material of the element, but on its temperature. The color of an object dependent on its temperature was expressed by Wien's law. Black-body radiation is the thermal radiation emitted from an opaque, non reflective body : 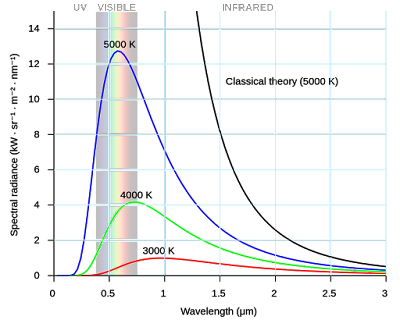 The physics behind the problem of the black-body radiation spectrum is a hard problem to crack- there is a lack of radiation at ultraviolet wavelengths. A simple, obvious approach doesn't work to solve the problem. Black-body radiation can be modeled using a box with a small hole in it- light entering the box bounces around inside before escaping, most of the entering light gets absorbed by the walls of the box- what an observer sees in the hole doesn't depend on what entered- there is only a tiny leak of light from outside. A good analogy of this box model is a pipe organ- the pipes of an organ can be considered boxes with holes, only certain sound frequencies can occur in specific pipes, which accounts for the different pitches they produce. As waves travel back and forth, they interfere with each other, creating peaks and valleys. The symbol for wavelength is a lowercase lambda, with a single wave being defined as the distance for a wave to attain a peak, then descend to a valley, and return to the starting point. A single up-and-down motion is half a wave: 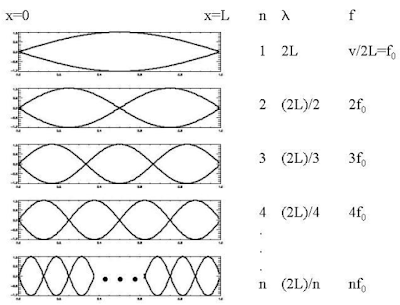 Light works in a similar manner as sound does- shorter wavelengths have longer frequencies. With the interaction of waves bouncing around within a box, there are lots of ways to produce various wavelengths. With the interaction of waves, a heating object, according to the classical physics model of the time, should emit an infinite amount of ultraviolet light and x-rays. Since this does not occur, this model was termed the ultraviolet catastrophe- Dr Orzel joked that this would be a great band name. Max Planck resorted to a 'desperate trick' to resolve the problem of black-body radiation, proposing that there were 'oscillators' in the walls of the box producing light, each oscillation having a characteristic energy which it can emit only in multiples of one. Planck was never quite satisfied with his 'solution' to the problem of black-body radiation. Quantum processes eliminate the problem, eliminating high energy. Dr Orzel then showed us an infamous image illustrating black-body radiation. Planck thought his solution was ugly, an inelegant trick. An 'obscure patent clerk in Switzerland', as Dr Orzel joked, proposed another solution- though light acted as waves, it was also made of particles, dubbed photons. A look at hot objects like toaster heating elements resulted in the start of quantum physics.

The second part of the morning routine which Dr Orzel invoked in his lecture was a beeping alarm clock. Neils Bohr observed that atoms of a particular element absorb and emit light at certain frequencies, each element has its own spectrum, producing bright bands at certain wavelengths: By observing the different spectra, new elements could be identified. Dr Orzel advised us to think of electrons orbiting an atom's nucleus- an electron emits light when it moves from a high energy orbit to a low energy orbit. He described electrons as being 'happier' in certain orbital states, emitting light as they move between sites. Time is measured by the oscillations of cesium atoms, with one second being equivalent to 9,192,631,770 oscillations of a cesium atom. The U.S. Time Reference site derives the official time from atomic clocks, in which cesium atoms are cooled down, then released into a vacuum cavity in which they interact with microwave sources which measure oscillations- one of these atomic clocks could run continuously for one billion years before deviating by one second. Cell phones interact sync with these atomic clocks. A plug-in alarm clock syncs up with the alternating current from the wall outlet, sixty cycles per second. Dr Orzel quipped that even a cheap alarm clock uses quantum physics.

Dr Orzel joked that it takes three things to make a talk, so he moved onto his third example of everyday quantum physics- the internet. Computer operation depends on the most infamous thought experiment ever conceived, the Schrödinger's cat though experiment. In this thought experiment, a cat is placed in a diabolical device, a box equipped with a source of poison which can be triggered by the radioactive decay of an element also placed within the box. There is a fifty percent chance of the radioactive decay triggering the release of the poison within an hour. At the end of the hour, will the cat be alive or dead? According to quantum theory, the cat is both alive and dead until the box is opened, and the state of the cat is observed. According to Bohr, the special state of electrons explain the light bands of the spectrum, but this can't explain all states. Bohr attempted to find reasons why some states are special. In 1923, Louis de Broglie theorized that electrons, while particles, have the properties of waves, and that special states are due to oscillations. The theory that electrons behave as waves can be empirically tested through the 2 slit experiment- light shone through a barrier with two slits will create light and dark spots, an interference pattern. Atoms emitted through two slits will also create an interference pattern reminiscent of light waves. As hydrogen waves move through space, they spread out and electrons are shared between atoms over time, and electrical bonds are shared through atoms. The uncertainty of which electrons belong to which atoms are similar to the uncertainty about whether that cat in the box is alive or dead. A computer's silicon chips work via the control of electrons moving through a solid- the internet exists, as Dr Orzel joked for cat pictures, and because of Schrödinger's cat.

Dr Orzel wrapped up his lecture by stating that the ordinary activities we engage in every day are quantum at their roots, but that the discovery of quantum mechanics was a towering intellectual achievement, and that the people responsible for quantum theory are titans. Dr Orzel ended his lecture with a beautiful statement- he doesn't want to drag quantum theory down to the mundane level, he wants to elevate everyday occurrences.

The lecture was followed by a Q&A session. The first question involved the relationship between quantum mechanics and the standard model- quantum mechanics involves very small things, while the standard model works for bigger things. He noted that there is a smooth transition between quantum and standard wave models. Another question involved the possibility of quantum computing, which has generated a lot of buzz- the idea behind it is that the quantum mechanics can be mapped onto traditional systems so that a value can be either 0 or 1 or both. This would be useful for computing large values rapidly, and would be invaluable for code-breaking. Some bastard in the audience, wanting to open up a can of worms, asked whether Dr Orzel thought that string theory has any theoretical value- Dr Orzel, with good humor, noted that string theory has opened up some useful mathematical queries, but has not modeled anything. The following question involved the many worlds hypothesis, which posits that all possible measurements of atoms can occur- electrons are in many states, observers are in many states, and instruments are in many states. Heady stuff, that... A question regarding relativity elicited a funny response from Dr Orzel- quantum physics and special relativity play well together, up to fifteen decimal places, but quantum physics doesn't play well with general relativity. The problem is that quantum physics is 'spiky', and spikiness doesn't mesh well with the smooth spacetime of general relativity. Black holes are the one phenomenon where both play well together. Regarding math- physics depends on the, as Eugene Wigner put it, 'unreasonable effectiveness of mathematics in the natural sciences'- the rapidly increasing computational power available to researchers has had a great effect on the sciences. The last question of the night involved quantum entanglement, Einstein's 'spooky action at a distance'- if two entangled particles are separated, even at great distances, effecting one will effect the other in similar fashion- the action will occur faster than the speed of light, even over arbitrarily large distances. The particles are in an uncertain state until measured, which prevents entanglement from being used for faster-than-light communication... the confirmation takes place at a rate slower than the speed of light. Well, so much for the ansible...

Dr Orzel delivered a great lecture- mindbending concepts served up as sweetly as a plate of waffles. His bringing the everyday tasks of a morning to the lofty heights of quantum theory was done with charm and humor. Put succinctly, he knocked it out of the park. Kudos to the good doctor, Margaret and Dorian, and the staff of the beautiful Bell House. Dr Orzel has a lot of videos on YouTube explaining various concepts in physics. Here is the video which is the precursor to his speech of last night:

Start your day with SCIENCE!

A photon is going through airport security. The TSA agent asks if he has any luggage. He replies, "No - I'm traveling light."