Schadenfreude is supposed to be a shameful feeling, but I have to note that it is extremely satisfying to see a total piece of garbage fall, and fall hard. I find the crash and burn of Milo Yianonothingjonsnowpolous to be hilarious to an almost useemly degree. This one-time gadfly of the alt-right is now over two million dollars in the hole, and there doesn't seem to be any way that he will ever recover... his flippant remarks concerning pedophilia caused him to lose the favor of most of the American right, and he lost a book deal, having to self-publish his magnum dopus. This past summer, he blamed his dwindling fanbase for his fall from the lofty heights of right-wing shitlord status. At one time, he was able to muster troll armies to harass actress Leslie Jones to the extent that she had to abandon social media. Now, he can't even rattle a tin cup for donations.

As delightful as Milo's fall into penury has been, I am even more gleeful about the fact that his billionaire backers pissed so much money away on a grifter who spent it on pedicures and poppers, rentals and rentboys, and the now-infamous 'crabs and cocktails'. Better that Mercer money go to waiters and pool boys than to be spent on political action. Besides stiffing the 'whales', Milo has boned a bunch of deplorables- Gamergaters, Islamophobes, Sad/Rabid Puppies, and assorted cobags. His debt spreadheet reads as a who's who of disgusting people: 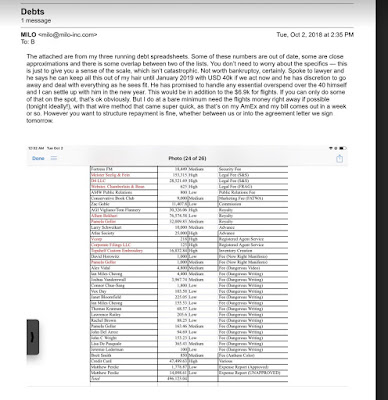 I don't think he will ever recover from this fall- he blew too much money and dicked over too many people for him to recover. He isn't big enough to get away with non-payment, like Dotard was, he isn't interesting enough to get an actual journalism job (he infamously took credit for his minions' work), and he is too toxic to stage a redemption narrative. He's done... I just hope his cleaning lady gets paid.

Milo is a horrible person. His Schade is my Freude for sure. -no shame in that.

I think it’s hilarious how he pissed away all that money, and I REALLY want him to get in a legal brawl with Pamela Geller.

in thinking about a more nuanced view of schadenfreude, i believe i have found a possible workaround to the uncomfortable problem of enjoying another's suffering

although their suffering may be well-deserved, one's enjoyment of it is nevertheless a problem if one's goal is to become truly compassionate

but what if their suffering now is a learning experience for them, made necessary by their previous bad choices, and a stepping stone towards being able to make better choices in the future, on their journey to becoming a wise and good person (maybe in the next life, or the one after that)?

this is my way of resolving the conflict between ordinary consciousness and the enlightened perspective, as posed by plato, for example, when he has socrates say that the quotidian perspective on justice is to return evil for evil in proper measure, whereas the wise strive to never commit evil at all

with best wishes in the search for truth, justice, and the potentially sentient way of maximizing the common good