After reading of the death of seven year old Jakelin Caal Maquin while she was in Border Patrol custody, I knew that I would have to post on this tragic, disheartening subject. It took a while for me to build up to this post, though... I spent much of my Saturday surrounded by healthy, well-loved children of Jakelin's age, and while on the 4 train home, there was a girl on the train who looked somewhat like a slightly older Jakelin, a girl with a solemn-looking Mayan face like hers: 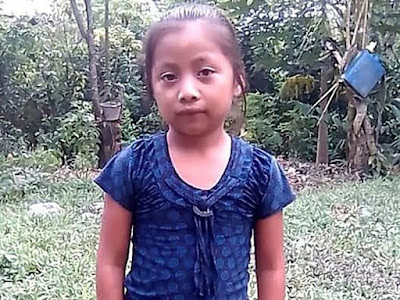 She sure looked like a threat to these here United States...

Years ago, I did a lot of consulting work in the Longwood section of the south Bronx. This worksite was a large facility, with multiple shifts worth of employees, but the busiest shift was the day shift, when the office staff and management joined the essential personnel who performed the day-to-day operations of the facility. The day shift kept the local delicatessen busy, and I got to know the deliveryman pretty well. He was a Guatemalan man who appeared to be in his early twenties. In the course of one of our conversations, I made a passing mention of Miguel Ángel Asturias' novel Hombres de Maíz, which takes its title from the folk belief that modern humans were created from maize. He smiled and told me that he was 'el hombre de la milpa'. The milpa is a raised plot on which corn, beans, and squash, the characteristic three sisters of all Native American agriculture, are grown, along with chiles, avocados, and other fruits.

Even in the far-flung concrete canyons of the Bronx, here was a man who maintained his love for, in a very literal sense, his native soil, the soil of the milpa which sustained him in his youth... a love of a land which could not sustain him in his adulthood, one celebrated by peasants the world over. He was of the milpa, from the milpa, but no longer in the milpa.

Jakelin Caal Maquin was a daughter of the milpa, a Q’eqchi’ Maya girl from a poor village in a country still impoverished by decades of civil war which often targeted indigenous people, the commercial growth of cash crops on large plantations, and climate change. The land, the sacred milpa, could no longer sustain her family, so she and her father took the perilous journey north, where she died in the custody of agents of the government of my nation, a nation which I am finding it more difficult to be proud of. I think back on el hombre de la milpa, riding his bicycle on the potholed, rough streets of the Bronx, and I think of the solemn faced girl on the 4 train last weekend, and I feel a melancholy... it's not easy to make it here in the 'States without a formal education, but I sure wish that Jakelin had been given a chance. She didn't die on the journey, she died while being in the power of our authorities, who could at the very least have performed a wellness check on this poor child.

This is a difficult post to write, it's not easy to face the fact that your own dear homeland is being run by monsters. At any rate, I would hate to have this post be nothing but a downer, so here is an animated version of the Q’eqchi’ Mayan epic Popul Vuh with images inspired by Mayan polychrome pottery:

I've posted this video before, as it remains a favorite of mine. When the news is mainly composed of downers, it's important to take comfort in things that you value. Of course, the post title is taken from the musical based on Don Quixote, and Cervantes' novel is another favorite of mine... we sure could use more idealism these days, maybe that famous caballero manchego wasn't so crazy after all.

Thanks, bowtiejack, this is really maddening.