Last night, I headed down to the beautiful Bell House, in the Gowanus section of Brooklyn, for this month's Secret Science Club lecture, featuring experimental psychologist Dr Michael Slepian of Columbia University, he is also the Sanford C. Bernstein & Co. Associate Professor of Leadership and Ethics.  Dr Slepian has recently released a book, The Secret Life of Secrets: Hoe Our Inner Worlds Shape Well-Being, Relationships, and Who We Are, and the current lecture concerned having and keeping secrets.

Secrecy is common, it is all around us.  Dr Slepian cited secrets such as Coca-Cola's formula, the NSA, and Scientology.  Secrecy is an intention to keep some piece of information unknown by one or more people.  Dr Slepian asked, "What is it like to keep a secret?"  Secrets are a burden, they can be draining, they can form a gulf between ourselves and others.

Secrets feel heavy- perception and behavior are scaled to the costs of acting on our environment- more resources are used, the world is more challenging to interact with.  In one survey, participants were asked to estimate the slope of a hill- individuals keeping a big secret judged the hill to be steeper than individuals without big secrets did.

About ten percent of the subjects in one survey were preoccupied with infidelity. This can actually make tasks such as carrying groceries or walking the dog more difficult.  Thinking about secrets makes one feel more burdened.  Dr Slepian said that he would have stopped studying secrecy, but another researcher failed to replicate his work, so he had to continue.

Whether one sees a secret as big or small is not as important as how preoccupying a secret is.  Big secrets are not always preoccupying, people learn to live with them.  The burden of secrecy is less about what the secret is, and more about how often the secret is on one's mind.

As an example of a secret, Dr Slepian brought up infidelity.  Among Americans, 30% of respondents have been unfaithful to a partner (not necessarily a current partner) at one time, the figure worldwide is about 20%.  If individual A is in a long term monogamous relationship with B, and has a one-night stand while on a business trip, A has a secret at the moment A decides not to inform B.  Even when B is not present, this secret will be a burden.

There are different ways to keep secrets, such as concealment, dodging the question.  This is a small slice of the secrecy experience.  Secrecy can result in mind-wandering, unresolved goals, and a failure to seize opportunities to take actions to solve problems.  It's not necessary to actively hold back secrets, they can spontaneously come to mind.

In one study, respondents were asked to categorize experiences, and asked to list the ones they kept secret: 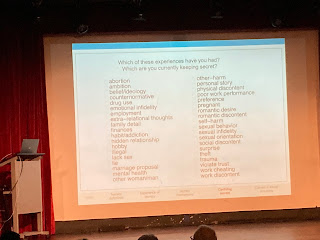 A typical respondent kept 13 secrets at a time.  We keep the same kind of secrets.  People think of their secrets far more than they conceal them.  Secrets cause people's minds to wander more often than non-secrets.  This matters for well-being.  Frequently. concealing secrets doesn't harm individuals as much as preoccupation with secrets does.  The stereotype of concealing a secret being harmful does not occur often... most secrets never come up in communication.  People are ready for the moments in which they will conceal a secret, but not for the mind-wandering and preoccupation.

Dr Slepian noted that more data sets were required to gauge the harm of keeping secrets, and he displayed several diagrams concerning various dimensions of secrets and the harm they cause:

How do secrets hurt? In a recent JPSP, we find there are three dimensions to our secrets: 1. morality, 2. relationship-oriented, 3. goal-oriented. Each dimension has a unique harm (shame, isolation, uncertainty) and each offers an avenue for intervention https://t.co/BCqDlZLmoh pic.twitter.com/Z6rOoolxdg

Each dimension of secrets has a degree of harm, such as causing bad moods or shame.  Secrets can make us feel ashamed, feel isolated, and feel uncertainty.  The paradox of secrets is that concealment is not usually harmful, but thinking about a secret is.

Can people think about secrets in better ways?  While people can prepare to conceal secrets, can they prepare to think about them?  Confiding secrets to a third party can help- it doesn't reduce concealment, but it does reduce mind-wandering.  A small glimmer of hope can have a big effect- confiding leads to people feeling more capable.  People tend to choose the right people to confide in, compassionate, assertive people.  Would a confidant be burdened by a secret?  It's best to choose someone slightly removed from the situation, someone whose morals are aligned and won't be scandalized (and prone to reveal a secret as a punishment).  For confiding to backfire, it has to fail spectacularly.  It takes a really negative response to make people second guess revealing secrets.

The lecture was followed by a Q&A session.  The opening question, from some Bastard in the audience, involved cultural/religious factors in keeping or revealing secrets.  Dr Slepian immediately picked up on the subtext about the sacrament of confession in the Roman Catholic church.  He noted that, in comparing cross-cultural differences, it is useful to keep in mind how collectivist or individualistic a society is.  In collectivist cultures, there is an inauthenticity to keeping secrets- it breaks norms, there is a greater expectation of revealing in order to keep order.  That being said, in certain societies in which marriages are arranged, divorce is not an option, and social networks are small, there are more secrets.  In societies in which you find a partner on your own, it's easier to leave on your own.

Another question involved the positivity or negativity of a secret, what's the difference between keeping a birthday party secret and keeping an affair secret?  Positive secrets feel good because the point of concealment is to make the big reveal more exciting.  Such secrets make us feel in control, and add to well-being.

Are there secrets we should never reveal?  What harm would result from revelation?  If you want to reveal something to make yourself feel better, you should nevertheless consider the harm revelation would do to others.  Dr Slepian cited Dan Savage's "one time secret" model, but noted that repeat offenses aren't covered... ask yourself what your partner would want.  Even with a one-time lapse, 77% of respondents stated that they would want to know.  Dr Slepian also noted that there's no reason to figure this out on your own- seek a second opinion.  There's no reason to be alone with your secret.

In one study of HIV positive men in the 1990s, men who concealed their sexual orientation had worse health outcomes and died sooner than men who were open about it.

Asked about methodology, and the candor of respondents, Dr Slepian noted that, in internet surveys, the level of detail is shocking, people want to talk about their secrets.

What differences are there between children and adults when it comes to keeping secrets?  Children will deny even when there is evidence to the contrary (cooking crumbs on their shirts), they don't have other strategies.  Adolescents are better at holding back secrets, which can cause problems

Regarding neurodivergent individuals, there is not enough data.

Journaling might be useful, as long as it isn't rehashing the past or merely chronicling a harmful record. Dr Slepian mentioned PostSecret as an anonymous way to write a secret down and anonymously reveal it.

Some secrets just 'time out', they simply lapse.

What's the utility of secrecy?  A world without secrets would be less functional.  Secrets protect the feelings of others.  The optimal level of secrecy is not zero.

Regarding the difference between guilt and shame, guilt is "I did a bad thing", shame is "I am a bad person".

Pour yourself a nice beverage and soak in that SCIENCE!!!

POSTSCRIPT: After the lecture, I joked with Dr Slepian that he should go into a Catholic church and participate in confession, just to experience the process of revealing a secret anonymously to a complete stranger.  I told him that he could find movie scenes depicting the sacrament so he could do it in the traditional fashion.  He joked that he would need a 'wingman'.

Thank you. That was interesting and it got me to thinking about my own secrets. I have a few.

I will have to read this again.

I usually lie or keep secrets to avoid punishment

If current trends continue, there will be a lot more secrets.