The QAnon conspiracy compendium (it collates a whole bunch of conspiracy theories into one unified whole) turns four years old today.  To understand the QAnon phenomenon, one must know that it started as one of many 'insider anons', anonymous shitposters claiming government insider status on the imageboard 4Chan.  Before QAnon, there was White House Anon, FBIAnon, CIAAnon, Highway Patrol Anon, and the like.  Even QAnon's first post, four years ago, was a response to another anonymous shitposter who claimed that Hillary Clinton's arrest was imminent: 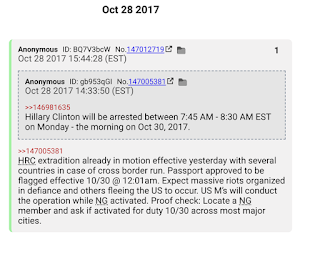 It should have been an inauspicious start, because Hillary Clinton is still at large, haunting the imaginations of Trump rank-and-filers.  Even other 4Chan anons pegged 'Q Clearance Patriot' as a fraud, but the whole thing took on new life as a small coterie of Trumpers amplified it on larger platforms, such as reddit and Facebook, exhorting older Trumpers to avoid the confusing sewers of 4Chan in favor of other aggregator sites. Later, the Q-poster took his schtick to 8Chan, 4Chan's even more toxic counterpart, and 8Chan's proprietors Jim and Ron Watkins, took the reins.

QAnon's success is largely due to two things- it is an optimistic fantasy for awful people, portraying Donald Trump as a competent, even genius leader, and themselves as heroic 'digital soldiers' winning a 'meme war' against their enemies by posting stupid images online... and it is a game in which participants seek meanings for the cryptic puzzles and allusions posted by the mysterious Q.  Since most of the actual content was created by the marks, the conspiracy complex absorbed all sorts of whackaloon material- aliens, a living JFK Jr (who might be a schlubby paisano from PA), mole children, vampiric elites, Democratic sex cults, demon worship, time travel... all have a place in the big Q umbrella.

In an evil genius move, the Q-poster, criticized for failed predictions, told his followers: "disinformation is necessary."  This thought-terminating cliché could be spouted by QAnon adherents as a counter to all criticism... whenever Q messed up, it was a calculated move to throw off adversaries.  Now, THAT is a Get Out of Jail Free card.

If you want a deep dive into this material, the go-to guy is Mike Rains, Poker and Politics, whose 'Q Is Always Wrong' thread is the most comprehensive debunking of the whole sorry mess.  Other debunkers are listed by Sara, a grad student studying extremist movements.

Personally, I have a love/hate relationship with this topic.  I am fascinated by conspiracy theories, though I hate the fact that they destroy families and relationships, and always seem to boil down to antisemitism.  This topic is interesting, but the phenomenon has done incalculable damage to our society.  It's been four years, four stupid years, of this nonsense, and tragically, it doesn't seem to be going away, no matter how many of its predictions failed.