A week ago, I posted about Karl Edward Wagner's short story Sticks, which is a love letter to pulp horror fiction, and an homage to illustrator Lee Brown Coye.  Composing that post was a lot of fun, besides revisiting a story I like, I checked out a lot of Mr Coye's illustrations, which I am partial to.

While tracking down Coye's oeuvre, I came across an illustration he drew for a publication of one of the United States of America's oldest and greatest 'ghost' stories, The Legend of Sleepy Hollow.  Reading the 'Legend' is a yearly ritual for me, it is a local story, taking place about fifteen miles north from where I live, by a local hero.  While people who haven't read the original story misinterpret it as a Gothic tale, I consider it the original 'Scooby Doo' tale, a comedy with some purportedly supernatural elements that a skeptic could debunk by using investigative techniques that the superstitious protagonist fails to employ.

Anyway, Coye drew a nice sketch of Irving's Ichabod Crane (so different from the real Ichabod Crane), a depiction of Crane riding his horse while reading a book, perhaps a lurid book by a religious fanatic:

He was, moreover, esteemed by the women as a man of great erudition, for he had read several books quite through, and was a perfect master of Cotton Mather’s “History of New England Witchcraft,” in which, by the way, he most firmly and potently believed.

The illustration  does not depict Crane on the night of his autumnal encounter with the Headless Horseman, as one can divine from the skunk cabbages drawn in the foreground: 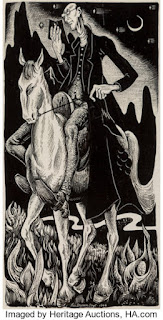 I really like this illustration... if I have one beef with it, it's that Coye's Crane's nose doesn't have the leptorrhine quality that Irving so lovingly described:

The cognomen of Crane was not inapplicable to his person. He was tall, but exceedingly lank, with narrow shoulders, long arms and legs, hands that dangled a mile out of his sleeves, feet that might have served for shovels, and his whole frame most loosely hung together. His head was small, and flat at top, with huge ears, large green glassy eyes, and a long snipe nose, so that it looked like a weather-cock perched upon his spindle neck to tell which way the wind blew. To see him striding along the profile of a hill on a windy day, with his clothes bagging and fluttering about him, one might have mistaken him for the genius of famine descending upon the earth, or some scarecrow eloped from a cornfield.

All the other details check out.

As luck would have it, the Stuff You Should Know podcast had a short episode which combined the origin of the Jack O'Lantern with details about The Legend of Sleepy Hollow.  They discuss the historical Ichabod Crane, who really should be better known.

My annual re-read of The Legend of Sleepy Hollow always reveals something new about this charming story.  While the story about the Crane/Van Tassel/Van Brunt love triangle (all three characters are pointedly not particularly nice people) is entertaining, the story's main appeal to me is Irving's gorgeous, detailed description of the Lower Hudson Valley, a region I know and love, a region Irving knew and loved.

Thanks. It looks interesting. At the moment it is what we are doing here that is most important. Things are still pretty scary. But we are still observing this "holiday, festival, ceremony, tradition ".