I worked the graveyard shift this morning, and when I arrived last night, shortly before midnight, a weird mood has hanging over the workplace like a bad smell.  The cat was nowhere to be found, and the human coworker I was relieving was in a peevish mood.  To put it succinctly, he was pissed off because he was pissed on...

It's not a common behavior, but female cats occasionally spray, typically when stressed, but also as a marking behavior.  After a particularly affectionate display toward her human coworker, Ginger marked him with an atomized spray of pee, claiming him as her property (goodness knows she doesn't have a lot of stress).  While the amount was miniscule, it was directed squarely at his sweatshirt, right underneath his collar, so the aroma was unavoidable.  Needless to say, he wasn't exactly pleased, so he yelled at Ginger, something to the effect of, "What the hell did you just do?"

While I was absorbing this tale, the culprit ascended from the basement, no sign of contrition on her feline visage.  I was laughing at the whole sorry story, and noted that, to my knowledge, Ginger had never peed on me (though if the amount were miniscule, who's to say I would notice having my pantleg sprayed?).  My coworker laughed, "That's because she so thoroughly owns you!"

After my human coworker left, Ginger continued on in a bit of a fey mood for about an hour, perhaps she did realize that she had committed a faux pis.  She quickly ascended the stairs when she heard me pop open a can of food, though, and, after dining, resumed her typical position lying on top of my sweatshirt... no need to spray it, her claim is pretty secure.

At one point in the wee hours of the morning, I raised the thermostat a couple of degrees, so she moved to the top of a radiator cover, one of her favorite sleeping spots: 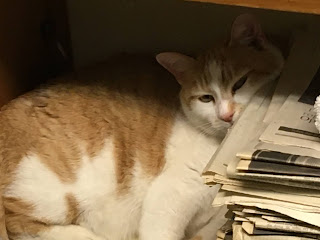 Look at that smug face!  Ain't she a wicked pissah?

This is off topic. My question is about revenge.
Are we just going to allow those trump idiots to walk away and say that nothing happened?
Will they go free?
Those enemies. I could tell you about them .

I will tell you that i want revenge for what that asshole has done to us. I don't want his money. It never was his anyway.
That thing owes us some repentance.
It might have been different if he had listened.
He could not listen because of his idiot followers.
I want revenge.

Anyway i want revenge for that terrible thing.

How do you propose getting your revenge? This isn't a Poe story.

I prefer to go through the justice system. These people need to be incarcerated for their crimes, but I don't think a personal desire for vengeance outweighs the societal need for justice.