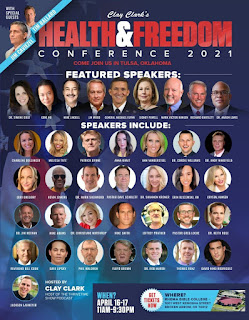 I'm not exactly proud of this, but I recognize more of those names than I'd care to admit.

Caviezel did not disappoint, spinning a yarn about the adrenochrome harvesting conspiracy theory.  Cavaziel, will be playing Tim Ballard, a 'human trafficking expert' who is under investigation for sketchy practices, in an upcoming movie.  In a 'blink and you'd miss it' moment, Cavaziel goes full-on Mole Children conspiracy:

You have to know the lingo to understand what he's saying: "Because they're pulling kids out of the darkest recesses of hell right now, in DUMBs and all kinds of places." DUMBs are Deep Underground Military Bases, which in certain conspiracy circles are the sites of sinister goings-on, such as the breeding of Mole Children slaves, and meetings between high ranking officials and aliens/demons/Sleestaks. This is basically the Shaver Mystery with the serial numbers filed off, a pulp horror adventure bridging the gulf between fairy abduction lore and the modern UFO abduction urban legend. Also, I dig the way Caviezel turned 'adrenochrome' into a verb.

Caviezel continued in very confused fashion, elaborating on the harvesting of adrenochrome:

How Cavaziel has fallen since the early days of the Oughts, when he played Jesus Christ on the big screen in a blockbuster movie. Now, he's got to be content with playing the Moleman Messiah in a straight-to-video crapfest... and he's going to blame the result of his poor life choices on some sort of sinister 'cancel culture', undoubtedly by (((those people))), by which I mean DEROs.

POSTSCRIPT: When The Passion of the Christ came out, I was dating a girl from Krakow.  She mentioned the movie, and I told her, "You really don't want to see it, it will only make you upset."  A couple of days later, I met her after work, and she asked me, "Are my eyes red?  I've been crying all afternoon."  Sure enough, she had gone with a friend of hers to see the movie after their English class had ended.  I immediately thought to myself, "Damn, it's not just a movie about an innocent man being tortured and murdered, but you kinda know the guy... if you're seeing it, you probably have a picture of him on your wall."

It's truly amazing how long a shadow it casts on the entire conspiracism culture. I Remember Lemuria really is an ur-text of whackaloonery, perhaps second only to The Protocols of the Elders of Zion.

Holy shit. I had never heard of the one about the Mole Children.

I don't know from the Shaver Mystery (and if it's inspiring to these confused, dangerous people, I'm probably better off not knowing), but it's fascinating to contemplate all this stuff in some kind of continuum with the very widespread European folklore about fairy kidnapping.

Except the fairies left changelings to replace the stolen human children. From the surviving written records of changeling cases, some Brit folklorists speculate that the origin of the idea may be the post-partum physical decline of babies with certain kinds of congenital conditions. IOW, it was an attempt to explain a rare and frightening natural phenomenon.

Do you think there's a related thing goingn on with these Q folk? That they're latching onto this complex of insane ideas to explain some RW phenomenon? I don't think I mean just setting up a political scapegoat. What they seem to be doing seems more terror-driven than that to me.

But maybe they're mostly like the people who are real fans of horror entertainment. The more horrible, the more entertaining - and more exciting because (sort of) projected onto the real world.

Holy shit. I had never heard of the one about the Mole Children.

It was a pretty big deal here in the NY Metro Area because a distraught Midwestern stripper, armed with a shitton of knives, was arrested, trying to liberate them from the 'cabal'.

Do you think there's a related thing goingn on with these Q folk? That they're latching onto this complex of insane ideas to explain some RW phenomenon? I don't think I mean just setting up a political scapegoat. What they seem to be doing seems more terror-driven than that to me.

I think they are more inspired by Blood Libel narratives than fairy abduction narratives, though one of their 'theories' is that numerous members of the cabal, such as Barack Obama and Hillary Clinton have been executed and replaced by clones, so there's your changeling lore.

As far as the Shaver Mystery goes, it was a big deal in the Amazing Stories pulp magazine back in the late 1940s. It divided science fiction fandom, with Harlan Ellison being an early detractor, and seemed to be completely overtaken by the UFO craze.