After Fifty Years, What Are We Achieving?

I enjoyed the Google doodle celebrating the fiftieth anniversary of the first moon landing, narrated by Michael Collins himself. The Apollo 11 mission occurred shortly after I was born, the day of my christening... family lore has it that some of the attendees were glued to their car radios in the parking lot until they were told to get in the bleepin' church already! I've written a bunch of posts about the moon- musings over the celestial body's beauty, science posts, posts about the Apollo missions themselves. I work nights, the moon literally looms over me much of the time.

That world of fifty years ago seems remote... sure, while the Apollo missions themselves were peaceful, an achievement for humanity as a whole, secondarily an achievement for Americans, the United States was involved in bombing peasants to oblivion in Southeast Asia at the time (the Mekons pointed out this contradiction). The plaque left on the moon by Neil Armstrong and Buzz Aldrin is a beautiful bit of prose, but the mission didn't herald an era of peace: 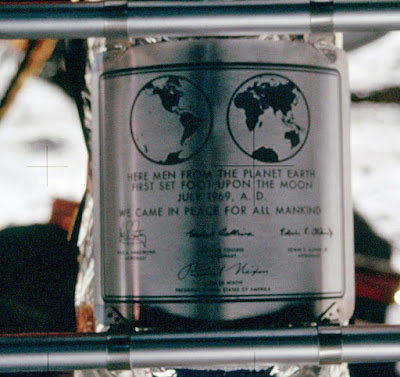 Rather than heed the Call to Adventure, the excitement of discovery, humanity's leaders decided to become bogged down in greed, fundamentalism, superstition, and tribalism. What should have become a Grand Mission for All Humanity soured, and petty, parochial concerns came to preoccupy Homo sapiens. Scientific inquiry takes a backseat to distortions of data to push corporate agendas, government policies subsidize fossil fuel extraction rather than the development of clean, renewable energy sources. Monkey trials are conducted, flat earthers push their nonsense on social media platforms. I think that, by nature, I tend to be an optimist, but the empirical evidence that has confronted me for the entirety of the twenty-first century causes me to have flashes of pessimism. I'm not the kind of person who dwells on concepts like the Fermi Paradox, but fifty years after one of humankind's most lofty achievements, it seems as if our species is slowly sliding to stagnation, and possible destruction, so that a tiny majority of the Worst Persons on the Planet can engage in an overconsumption that will eventually consume us all.

What are we achieving?

We've explored the whole solar system using autonomous probes which have sent back a wealth of data, without the utterly pointless expense and danger of sending humans (who wouldn't have been able to do as much as the probes have). Sending men to the Moon was of very little scientific value; the reason we did it was to demonstrate technological superiority over the USSR. That's why there have been no further manned missions to the Moon or Mars, and won't be. There's no valid reason to do it.

We've also developed the internet, the most powerful tool ever for helping individuals connect with each other, for disseminating information, and for defeating censorship. We've developed more and more sophisticated medical treatments using genetic science that wasn't even imagined in 1969. We've carried out the Green Revolution which has almost eliminated famine from the world for the first time in history, even as global population doubled.

If a lot of the population ignores or disdains science, well, that's been true for as long as science has existed. It progresses, nevertheless. The fact that the Trump regime is full of ignoramuses and bigots is bad, but remember, that affects only one country. Even if the US is stuck stagnating in idiocy for four years, the rest of the world goes on progressing.

Yes indeed going to the moon was a high point in science and civilization. But over 150 years ago during the US Civil War, Henry Adams made the observation that "Someday science may have the existence of mankind in power, and the human race can commit suicide by blowing up the world." So it's seems to me that fact that we may be doomed is baked into our history.