Secret Science Club Post-Lecture Recap: This Subject's for the Birds!

Last night, I headed down to the beautiful Bell House, in the Gowanus section of Brooklyn, for this month's Secret Science Club lecture featuring evolutionary biologist Dr Rafael Maia of Columbia University. Dr Maia titled his lecture 'The Colorful Sex Lives of Birds'. He noted that he isn't exactly the best birder, often having trouble finding his subjects in the field. He noted that the 'bird nerd' image is somewhat justified, with birders planning their honeymoons around adding to their life lists. He noted that he first became interested in studying birds by watching Jurassic Park, specifically the scene in which Sam Neill lectures an annoying kid who says that stating dinosaurs are like birds is dumb:

Studying birds is studying living dinosaurs, the evolutionary descendants of the dinosaurs which escaped the mass extinction at the end of the Cretaceous.

Charles Darwin observed that evolution occurs through natural selection. First, there is variation among members of a species. Secondly, there is heritability- variations are passed on to offspring. Finally, there is selection- some individuals are better at surviving and will be selected for better reproductive outcomes. To illustrate the concept, Dr Maia showed us a slide of one of Gary Larson's Far Side cartoons: 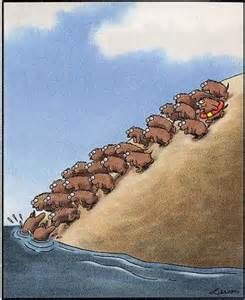 The lemming with the lifesaver will beat out the other lemmings in the selection process. Darwin knew nothing about genetics when he formulated his theory of evolution by means of natural selection. Darwin also wrote about the expression of emotion in man and animals, speculating whether or not behaviors are heritable and selected for. Is a particular behavior critical for reproductive success or not? Dr Maia showed us a video of the mating dance of the greater bird of paradise (Paradisaea apoda) from the Cornell Ornithology Lab's Birds of Paradise website:

Dr Maia quipped that sex and death are the only things that matter in evolution- reproducing is more important than survival itself. Why do most multicellular organisms have sex, why don't they just clone replicas of themselves? There are benefits to sex, advantages to gene mixing, such as disease resistance. Why are their two sexes, why not ten? There are two problems which must be solved by gametes- mobility and nutrition. Gametes need to move and they need to nurture developing offspring. If all gametes were identical, they would not be able to solve these two problems optimally. Thus, there are two types of gametes- tiny ones adept at moving (sperm) and large ones good at nurturing (ova). Occupying the middle ground is not so advantageous. Metabolically, sperm are cheap to produce but ova are expensive to produce. On the most basic level, the one thing which defines whether an individual is male or female is whether it produces small gametes or big gametes.

In the case of the long-tailed widowbird (Euplectes progne), females tend to prefer males with long tails. Such sexual selection can lead to exaggerated traits- in one study, certain male widowbirds had their tails shortened and others had their tails lengthened with extensions (PDF), with differences in reproductive success resulting.

In the case of Arizona house finches, females prefer to males whose plumage exhibits a greater degree of carotenoids. Carotenoids are derived from the diet and are an important anti-oxidant, put putting pigments in feathers is a luxury- excess pigment is a sign of better health, and most likely better genes.

Dr Maia then showed us a video of the mating dance of the blue manakin (Chiroxiphia caudata), which engages in a competitive group pre-mating behavior known as lekking:

Typically, one alpha male gets to mate with the female, the other males acting as 'wingmen'. The younger, less dominant males learn how to perform the mating dance by observing the alpha male in a joint reproductive effort.

Dr Maia joked that sexual selection among birds can produce crazy behavioral traits and crazy morphological traits, then showed us a video of a club-winged manakin (Machaeropterus deliciosus) beating its wings together over one-hundred times a minute to produce a sexually appealing stridulation:

One of the pitfalls of the traditional view of sexual selection is that it tends to 'erase' the female story, something alluded to in Sarah B. Hrdy's The Woman that Never Evolved, which opens with the sentence, "Biology, it is sometimes thought, has worked against women." While females were often dismissed as passive and ignored in studies of evolution, female behaviors are important in evolutionary success. Most bird species, about ninety percent, are monogamous. In most cases, they are sequentially monogamous, they form pair bonds for a breeding season, but mating for life is not the norm. In contrast, about three percent of mammal species are monogamous. It is thought that monogamy in birds may be due to low variation in sexual selection- males and females have similar selection pressures, even though males tend to be more ornamented than females. Even though monogamy is the norm, extra-pair paternity is found in seventy-five percent of bird species. Extra-pair young are found in about one in five nests, about ten to twenty percent of offspring are merely social offspring, not biological offspring.

The Australian superb fairy-wren (Malurus cyaneus) forms monogamous social pairs (males present females with flower petals in courtship), but both males and females engage in extra-pair copulation. In the case of these birds, females don't necessarily go for the most attractive males, but for neighboring males, favoring early risers (Mr Right-now is preferred to Mr Right). Dr Maia joked that, among fairy-wrens, it's better to be ugly than to be isolated.

Dr Maia noted that there are non-binary sex roles among birds. Among the lek-breeding European ruffs, males fall into three phenotypes- the showy, dominant territorial males which attempt to court multiple females, the less dominant satellite males who opportunistically mate with females while the territorial males are distracted, and the female-mimicking faeder males, which will sneakily mate with females right under the beaks of other males. Among white-throated sparrows (Zonotrichia albicollis), there are two phenotypes, white-striped and tan-striped. Both males and females can be of either morphology. The white form tends to be more aggressive, the tan form exhibits more parental care- most pair bonds are cross-morphology... opposites attract in this case.

There are even birds which exhibit a sex-role reversal, the wattled jacacna (Jacana jacana) being a prime example. Female jacanas are larger than males, have bigger wattles, and tend to be more aggressive. Females are polyandrous, mating with multiple males- they produce a lot of eggs which the males will incubate. Females will even break other females' eggs and mate with the the bereaved fathers. Jacanas inhabit a tough environment, one in which the loss of eggs to predation approaches ninety-percent. For female jacanas, the eggs are not that expensive, and the males do the work of nurturing. Dr Maia stressed that it is not a good deal to overgeneralize when discussing reproductive roles.

Dr Maia then veered into the 'JUST PLAIN NASTY' aspects of bird reproduction. This involves ducks, so here's a huge TRIGGER WARNING for anyone who wishes to avoid discussions of violent, outré sexuality. Male ducks will attack females, often nearly drowning them in order to prevent them from escaping. Male ducks will copulate with other male ducks, even dead ones. Male ducks, unlike most birds, which merely engage in cloaca-to-cloaca sperm transfer, have evolved elaborate 'penes' WARNING: CANNOT UNSEE FOLLOWING VIDEO:

There is an immense diversity of morphology and behavior, which Dr Maia cited as the overarching basis of his research. He then presented us with a video of a blue-black grassquit's (Volatinia jacarina) leaping display:

The male grassquit defends a small territory, and its leaping displays showcase the color of its plumage.

While humans have three types of cone cells, resulting in trichromatic vision, birds have a fourth type of cone cell that allows them to see into the ultraviolet. Often, the males will have plumage which reflects UV light in order to attract females.

Dr Maia then shifted the topic of his lecture to the ways by which bird plumage derives its colors. Generally speaking, brown and red plumage results from pigments while green and blue plumage results from structural elements which reflect colors. The brown pigments in feathers results from the pigment melanin, which is collected in structures known as melanosomes. The reddish pheomelanin and the brown and black eumelanins form in differently-shaped organelles, which allows paleontologists to make educated guesses about the colors of dinosaur plumage using microscopy. In one dramatic case, paleontologists were able to determine that Anchiornis huxleyi probably had black and white plumage with a reddish crest. Ornamentation preceded flight, with complex plume patterns probably being the norm among dinosaurs. Yellow, orange, and red pigments are due to pigments known as carotenoids. Pigments result in a limited palette, which is insufficient to explain the variety of bird coloration.

The palette of bird colors is vastly expanded by structural colors. There are no known blue pigments, and very few green pigments used by animals. Structural colors result from the reflection of light- Dr Maia likened this effect to the iridescence of soap bubbles. The structure of a feather is complex, with differing pigment layers which absorb, reflect, and refract light. Some wavelengths cancel each other out, some reinforce each other. An expert can predict the structural factors which will result in particular colors. In birds, the brightest colors tend to be structural, as Dr Maia illustrated with this amazing video of a male Costa's hummingbird (Calypte costae) trying to impress a female with his iridescent mantle:

Iridescence is directional, it depends on the angle at which the light hits. Structural elements in the feathers of the dinosaur Microraptor gui reveal that the dinosaur had dark iridescent plumage due to the way in which its melanosomes were layered.

Dr Maia then ticked off some of the benefits of studying structural color in bird plumage, such as a new kind of mirrorless laser, improvements in fiber optics, improved camouflage, even better cosmetics.

The lecture was followed by a Q&A session, in which I was beaten to the punch by a gentleman who inquired about brood parasites such as cuckoos and cowbirds... how do they fool their victims? Dr Maia hypothesized that the calls of baby birds are probably similar enough that the adults don't figure out that something is wrong. Some bastard in the audience asked specifically about the hypothesis that ornamentation was correlated with lower parasite counts. Dr Maia reiterated that ornamentation was generally a good indicator of health and good genes, followed by a brief overview of the handicap hypothesis.

All told, this was another fantastic lecture, a feather in the cap of the Secret Science Club. My main interests lie in biology and the study of evolution, so this lecture hit the 'Secret Science Sweet Spot' for me- it was a great overview of bird reproductive strategies and the anatomy of feathers, illustrated by incredible video footage. I'm a bird nerd, and a dino nerd, so Dr Maia knocked it out of the park in my estimation. Kudos to Dr Maia, Margaret and Dorian, and the staff of the beautiful Bell House.

Thank you sir, Happy Thanksgiving to thee and thine.