Grab Your Pussy and Vote

As is typical, my worksite is a polling place. I arrived at work at 5AM in order to open the doors for the poll workers, who arrived at 5:30. I also help them set up the voting machines, because I know where we keep extension cords, surge protectors, and the like. By 5:55, we had about twenty people lined up inside, waiting for the polls to open. All day, there has been a steady stream of people coming to vote, many of them with children in tow. A local senior living community has been busing its residents in since about 10AM- every half-hour a busload arrives and swamps the voting machine for that particular district.

All told, the vibe has been pretty festive- a lot of the voters know each other. One girl, possibly a first-time voter if I am a good gauge of age, came in wearing a NASTY WOMAN T-shirt. Her companion, possibly her mother, was wearing a white pantsuit.

Meanwhile, we have had a couple of school groups onsite, because things are never hectic enough. With a bunch of small children running around, and the potential that one of them will drop something delicious, the cats haven't crashed the party yet. I'll have to repost my September primary election picture of a patriotic Ginger: 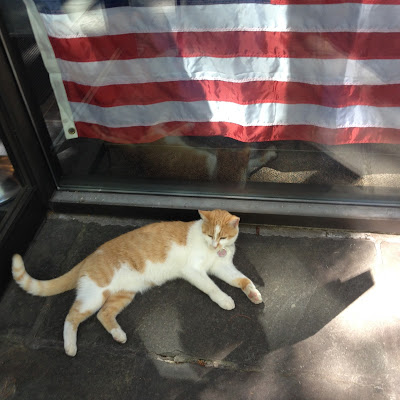 I haven't had a chance to grab that pussy, but I imagine she's been dodging questing elementary school hands all day. I get to clock out at 5PM, when the afternoon guy, who I usually relieve at 9PM, relieves me. I don't think I'll be waiting on line too long to vote- there are always plenty of voting machines at the polling place across the street from home. I think the vibe at home will be a little more low-key, it being a more populous neighborhood in New York State's fourth largest city. My next-door neighbor has had her Hillary lawn sign up for months, so I can sit down with her tomorrow for a nice long chat.

UPDATE: Murphy's law being what it is, we have had a heating problem in one of our buildings, so a service call was put in to our oil heat provider. I had to go across the site to make sure they had access to the building and was able to finally grab my pussy: 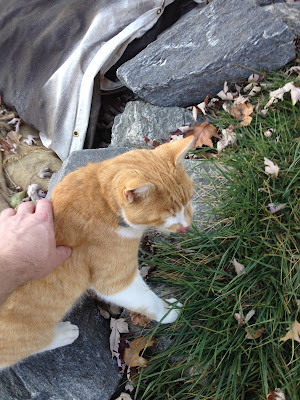 That's my beloved Fred, a most patient and sweet-natured cat. Now that I have grabbed my pussy, I feel confident about voting. #I'mwithfur, soon #I'llbewithher.

I voted for Jill Stein for President and Charlotte Pritt for Governor in Berkeley Springs on Wednesday, November 2.
~

OOOOOOF... I drank three ciders last night, and I feel like I have a hangover. I know it's not the booze.