The latest rallying cry of the Trump supporters is 'Drain the Swamp', which I find ironic, because Donald Trump is about as corrupt and venal as an individual can get- and his supporters are even worse, the sort of pond-scum that would heap abuse on a 12 year old with cerebral palsy just because he had the nerve to disagree with them politically.

The real joke here is that really draining the swamp would leave a bunch of nasty frogs without a home, especially the loathsome amphibian at the bottom of the morass: 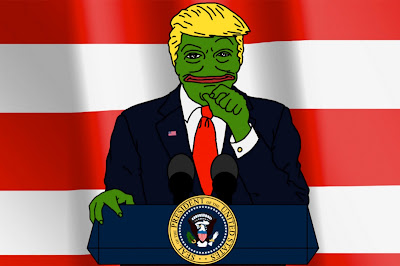 For the record, I love frogs and toads, and am appalled at any attempts to associate these delightful and endangered creatures with a hate movement.

At any rate, my sincerest wish is that there will be a whole ton of crying alt-right bros come Tuesday night:

Cracking the GOP will require the Dems to govern for their voters.

Unfortunately, the ones running the party have a habit of chasing corporate payola right after elections.

Maybe this time will be different.
~