Riding on the subway to attend the chat by Richard Dawkins last night, I noticed several people on the train wearing safety pins to show solidarity with groups which face marginalization and outright violence during the Vulgarmort regime. When I got to Symphony Space, I saw additional safety pins, including one adorning the T-shirt of a boy who asked the Esteemed Professor a great question about eusocial insects... can I just mention how great I think this kid is?

I ran into a friend of a friend who was wearing a pin. She was concerned enough about being put on a national database that she and her girlfriend decided that marrying is a risk that is just too great to undertake in Mike Pence's America. She mentioned that she had friends who had voted for Trump for various reasons, and that she asked them point-blank, "What are you going to do when they come for ME?" Sobering... as a cishet white male, this is the sort of horror story which I never have to contemplate, which is the real meaning of Straight White Male Privilege.

Riding the train up to the Bronx, I saw additional safety pins, silent but eloquent evocations of both safety and unity. Today, at work, I hunted up a small safety pin and affixed it to my sweatshirt: 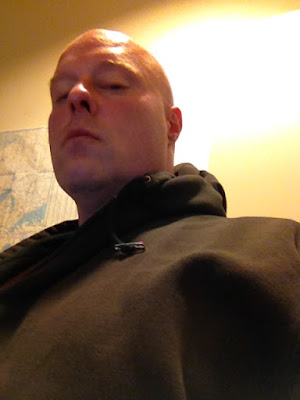 It's a mute symbol of solidarity, but if it signals to people that this is one shave-pated white guy who doesn't tolerate bigotry, then it will have served its purpose.