Yesterday was a busy day for me, the last day of working the graveyard shift for a while. I had been working midnight to 7AM, but have pulled a switcheroo with my teammate becuase we have events coming up, and I will have to work afternoons locking up one site before moving to another site for the duration of the shift. The alternative would have been working ungodly split-shifts on the weekend.

As luck would have it, I needed to get the oil in my car changed- it had hit the 5% lifespan level. I also needed a new tire, the treads of my front driver's side tire were starting to separate from the sidewalls. It's easier to bring to car to the shop at 8AM after you've finished the workday at 7 than it is to bring the car in before work.

When I arrived, there were a couple of people already waiting outside the place, but I have an ace up my sleeve- I always give the crew enough of a gratuity to buy a couple of pizzas (I know the folks at the pizzeria too, so everybody wins). My car was first in the service bays. After about forty minutes, the manager called me (I was hanging out outside, on the phone with Mom while I waited)- I would need two tires, the other front tire was developing a bubble. It would take three hours for the tires to be sent from the warehouse. Three hours? I figured it would be just enough time to walk across the Tappan Zee Bridge (we won't be using the official name this week).

The last time I had walked the bridge was just about a year ago, I met with friends at the Tarrytown train station, and we took a free shuttle bus to the Rockland County terminus of the span.  It was a festive walk around sundown, with the bridge gradually transitioning from a pedestrian suspension span to a brightly-lit gossamer miracle.  Still, the superstructure is a diaphanous beauty: 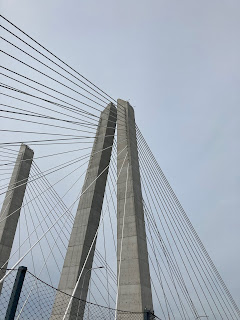 This time, the walk would be twice as long, with the regular truck traffic to and from New York City, the pace a little more steady, without the distraction of socializing.  There were fewer pedestrians, with most 'normies' being at work: 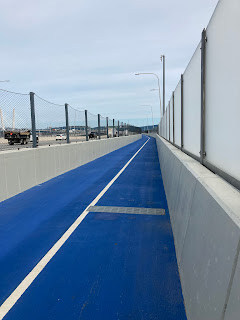 The scenery was, of course, magnificent, with the Sleepy Hollow Lighthouse being a highlight.

The walk wasn't too arduous, even though I've had couch potato tendencies throughout much of the pandemic.  I figured I needed a good, seven mile walk before I have to start working events this weekend  That being said, my feet were sore enough that I took dos aspirinas when I finally got home.  As a beneficial side effect, a head cold and runny nose (only one nostril, though) that I had been nursing all week dried up- I don't know if it was slight dehydration or breathing in the fresh Thruway air that did the trick.

When I finished the walk, my car was just about ready, the oil change had been accomplished, the tires replaced, and the finishing touch of a re-alignment was being wrapped up.  I felt good about being active while the car was being worked on- I figure it was a sort of tune-up for both of us.

I finally got home around 2PM, having left the house around 11PM the preceding night.  I was pretty much wiped, but that doesn't really matter, my entire sleep/wake schedule is going to need an overhaul anyway.

Good luck! Thanks. Going to the car place sounds so normal, like we used to do.
I don't know how to talk about turning from night person to day time person. It really is too personal.
I don't know how to talk about sleep and dreams.
These days, i figure if i get my poor beleaguered sleep self to give me a dream, i figure it means they are still there.
I ask them what do you like to eat?
Pickled herrings are always good. They also like olives.

I inherited a taste for pickled herring from my Mom. The Vita brand stuff in the cream sauce goes really well with pumpernickel.