A Beacon in the Darkness, Literally

Yesterday, the news was too depressing- with the cumulative effect of coverage of the Nice massacre and the Baton Rouge ambush dominating the airwaves, I decided that I needed to get out of the house early, so I headed to the Lighthouse at Sleepy Hollow for one of their annoyingly rare tours. The lighthouse, finished in 1883 and decommissioned in 1965 when the lights of the Tappan Zee Bridge rendered it superfluous, is accessed from the gorgeous Kingsland Point Park, one of the jewels of the county parks department.

The tours are run in a perfunctory fashion- while there is a sign declaring "you must make a donation for the tour", there is nobody to collect the money, merely a box which one would fill on the honor system. Being an honorable guy, I put in a fin. Here's where I note that anybody could have run off with the till, so kudos to the honest people visiting Kingsland Point Park. While I stood around waiting for something to happen, I took in the spartan surroundings of the first floor living quarters, with its antique stove and store of firewood: 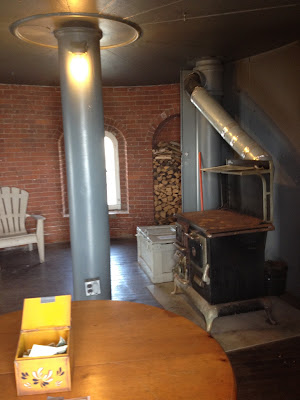 In the foreground, on the table, you can see the cashbox- it's a rather nice box, and I suspect that one would be more tempted to steal the box and leave the money than to steal the money.

As I was taking in the surroundings, I met a really nice New Jerseyite who was visiting with his two teenage children. He was a lighthouse aficianado and showed me his "lighthouse passport", stamped with the sigils of various lighthouses he had visited up and down the Eastern Seaboard. After a brief discussion, we decided that I would ascend the stairs in order to find a tour guide. The second floor was even more spartan than the first, merely festooned with posters describing the typical ships of the Hudson River fleet and nautical charts of the vicinity. With its porthole windows, the lighthouse has an appropriately nautical air: 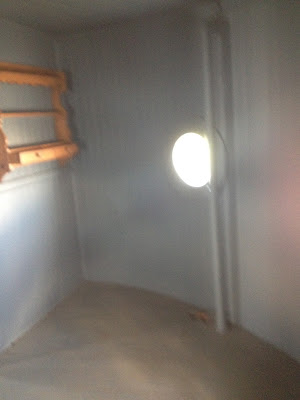 As one climbs higher, the place becomes even more austere: 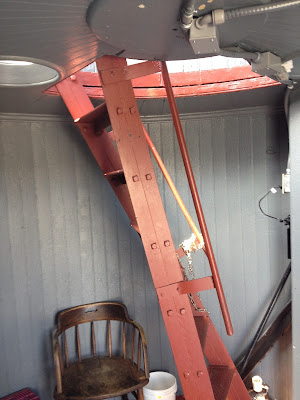 When one emerges at the top, one is greeted by a gentleman from the local historical society who explains that there is no structured tour, but if one has any questions, one merely need voice them and they would be answered to the best of his ability. The view from the top of the lighthouse was magnificent, with a particularly nice vista of the Hudson Highlands rising to the North and Northwest: 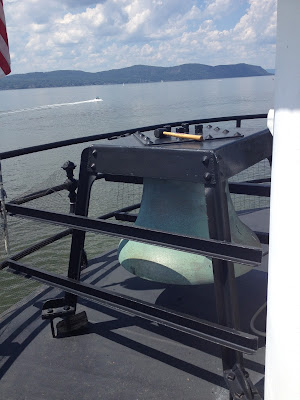 I descended and explained to my new friends from Jersey that the tour was pretty much self-guided, then climbed again to take in the glorious view- here's the new Tappan Zee Bridge rising just north of the old, increasingly dilapidated TZB: 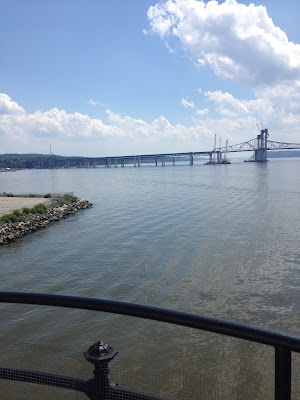 And a view of the metal gangway leading to the island on which the lighthouse stands: 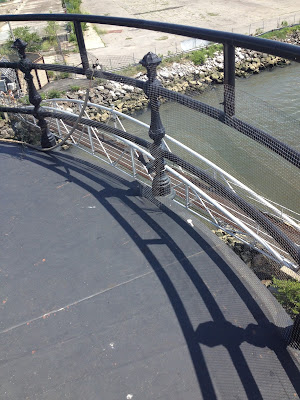 That post-industrial moonscape visible at the top of the photo is the site of the former North Tarrytown General Motors Assembly Plant. Old-timers will tell you that you could tell what color they were painting cars by what color the river was running. There's a reason why one is not supposed to eat Hudson River seafood more than once a month.

After taking in the view, I spied one of my co-workers walking across the gangplank with her two tall, rangy sons. I had a nice chat with them before leaving, noting that the scarcity of tour dates was what led to our meeting, that and a desire to get out of the house on a scorchingly hot summer day. It was a nice bit of good fortune, I hadn't seen her boys in months. After bidding them goodbye, it was time to head over to work. Visiting the lighthouse was a nice way to spend an afternoon, I just wish that it were open more often. I'd recommend a visit to anyone, but they'd have to either plan it out well in advance or be really, really lucky.

Wonderful views from up there.

I saw pics of that crane collapse, I wonder how long people had to sit in their vehicles in the hot sun.
~

It could have been so much worse, mikey, the crane didn't fall on anyone. One of my co-workers lives across the bridge. I told her to come to trivia night at the bar tonight if they don't clear the problem.

The view is glorious, Thunder. People are sitting in their cars. But the movable barrier has been reconfigured so people can turn around. They'll have to drive to the GW or the Bear Mountain, but they'll get home. This could have been so much worse.

It's my day off, got an oil change and could hear emergency vehicles rushing to the scene in order to help clear the debris. This could have been much, much worse.

A Mekon in the Darkness? Yes please....

There is a fine lighthouse on Lake Michigan in Milwaukee, in the midst of a park designed by Frederick Law Olmsted, and that's a singular thing....

You want to talk about crane collapses?

Of course, if this was on a project that was not as politically connected as the necessary Brewer stadium, it would have been cause for no end of investigation and finger pointing toward the Suspicious Dark Hued Milwaukee Citizens...