This far west of the eye of tropical storm Henri, we are experiencing a rain event with minimal winds, but the rain is pouring down like nobody's business.  I'm an old hand at navigating the streets in the area, so I know to avoid any of the major highways that abut a watercourse, which is most of them.  I took the NY State Thruway to work, and only experienced a couple of patches on local roads which had any degree of water retention (not really flooding hazards, but wet enough to create 'flume' effects).

Having experienced tropical storms and hurricanes, I made sure to place sandbags in front of the basement doors of our main building, which can sometimes flood.  The watercourse onsite is flooded, but hasn't overtopped its banks... yet.  I'm not very concerned about it doing so, the rain isn't as torrential as it had been a couple of hours ago.  We have flash flood warnings in effect until about 9PM, but I'm pretty well situated even in this relatively low-lying locale.

Right now, things are tranquil, and the only thing I have to complain about is spotty wi-fi... it might be a night for playing a game, if web browsing isn't feasible.  I'll find something to occupy my time, though it seems like SOMEBODY is bored with being stuck inside: 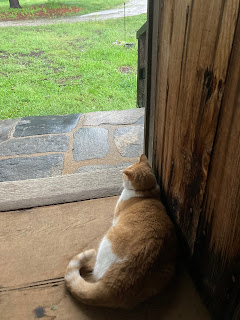 Sweetie, you really don't want to go out there.

Local Moving Companies Hey. This is a fantastic article. In Chrome, there's a problem with your site, and you should look into it... Because of this issue, the browser is the market leader, and a large portion of other people will disregard your excellent writing.