Trouble in the Land

Last week, Gothamist reported that white supremacist posters had been spotted in the Woodlawn section of the Bronx: 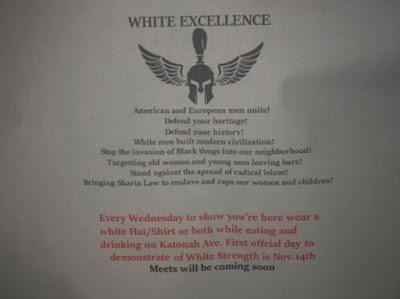 While I live in Yonkers, I consider myself a resident of the Greater Woodlawn community- there is a pretty much seamless transition from Yonkers' McLean Ave to Katonah Ave in the Bronx, the only real difference being the presence of MTA buses once the border is crossed.

Of course, the flyer is bullshit. It depicts a neighborhood under siege by sinister, dusky 'others'. As someone who has often taken the subway home in the wee hours of the morning, sometimes popping in to a local for a pint on the way home, I can vouch that this narrative is far from the truth. I also believe that it will backfire, because, historically, white supremacy has never been good for the Irish, who make up the single largest demographic group in the neighborhood. If it ever got out that whitey righty has posted 'wrath of the Saxon' crap, even the most ardent Blueshirt would join in the resulting donnybrook. The truth of the matter, though, is that the bulk of the Irish immigrant population is more liberal than your average white American, and that the working class immigrants are comfortable working with other immigrants... in the bars, there are Mexican busboys and barbacks working with the Irish bartenders and waitstaff. Carpentry and masonry crews tend to have the same sort of breakdown. In the face of a hostile influx of MAGA types, I imagine that the Irish community would side with Latinos, as is traditional.

For me, there are two great exemplars of the Seanchaí tradition among the Bronx Irish: Mary Courtney and Larry Kirwan, who collaborated on the immigration song Livin' in America:

Mary's the historian, the balladeer who keeps the old songs current, while Larry's the journalist, the satirist who observes the foibles of his adopted home. In 2000, Larry wrote of white supremacists, in the scathing song which lends its title to this post:

I had been planning to head down to Katonah Ave to get the lay of the land, to see if there were any racist scumbags trying to gain a foothold in the area, but a physical plant emergency on the job necessitated my going in early. I'll be leaving around midnight, so I have time to go on the scout in a local bar or two after work lets out. My advice to people who have been freaking out since 2016 has typically been 'protect your people, defend your area'. Now it's my area, trouble in MY land. I don't think that much will come of these flyers, which were quickly removed and roundly condemned, but I need to know the reality of the situation. This is beir bua time, if ever there was.