Other Toys Pale in Comparison with Big Yellow

My upstairs neighbor is an athlete- she runs half-marathons, has run marathons, and she participated in a triathlon this summer. She has her two kids involved in all sorts of sports: soccer, basketball, hurling, and Gaelic football. She is active in the New York Road Runners, so today she volunteered to support the runners in the New York City Marathon. This involved heading down to Central Park with the kids at about half-past seven in the morning.

When she knows she'll be out for the day, she asks me to let her dog, Georgie, out in the early afternoon so he doesn't pee in the apartment. Today, I got a reluctant Georgie out of the house and decided to engage him in his favorite game- I throw a ball and he savages it with his wee, sharp teeth. He's a terrier, so he's not so far removed from the small but vicious dog of gaming fame.

Today, I threw the ragged remains of the soccer ball that he had destroyed, but he wasn't interested in the thing. Out of all of the balls and sticks, and other throwable objects in the yard, the only thing that could pique his interest was a soccer ball sized replica of a tennis ball: 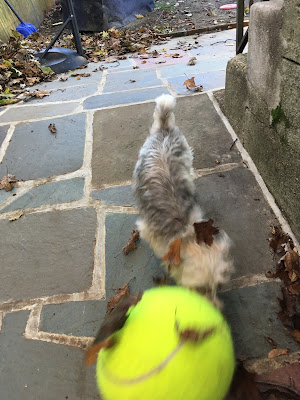 The thing is too big for him to get a purchase on, so his new approach is very much akin to a soccer player's, while making all sorts of bloodcurdling yips and yaps, he pushes the ball, snapping, across the yard. He actually got pretty good at herding the ball towards me so I could throw it the length of the yard again. Every once in a while, I'd try to interest him in another toy, but he just wasn't having any of that- it was the big yellow ball or nothing at all.

He was very pleased with himself, and after an hour of playing 'soccer' with him, I put a reluctant Georgie back in the apartment so I could get ready for work. Longtime readers will know that I am more of a cat person than a dog person, and the dogs I prefer are big, working or sport dogs. Nonetheless, there's an undeniable appeal to the scrappy, but high maintenance, Georgie: 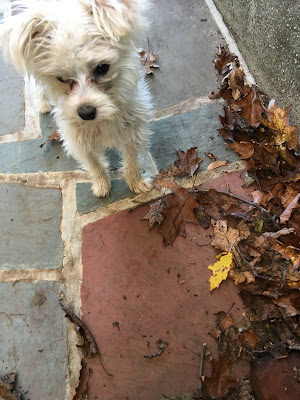 I texted my neighbor to joke about how he was only interested in the yellow ball and her response was "ARG LOL"... that pretty much describes the little guy.

He was a riot, the sounds emanating from his tiny little body were bloodcurdling.

I was raised with large German Shepherds, but have been partial to dachshunds since I've been an adult. My experience with small dogs is that most are big dogs trapped in a small dog's body, and that makes them awesome. Mileage does vary! :-)

Since I've been volunteering with the local shelter, I've worked a lot with cats (having picked up some useful knowledge here, thank you!) and believe our next pet will be feline. They're a lot cooler than I ever thought they are, and they don't tend to get adopted here the way the doggies do.

Yeah, I'm generally not a fan of little yappies but thay have their moments and, of course, they are dogs.

Since many small breeds - terriers and Dachsunds among them - were originally bred as hunters of fierce burrow-building varmints like weasels and badgers, I think it's fair to call them working dogs just as much as a big shepherd who's doing duty as a homebody family dog. or a retriever who's never seen a duck.
The stiff upright tails of Scotties, Jack Russells, etc. serve as handles so their human hunting companions have a way to drag them out of the quarry's burrow when their blood is up nd they're too fixated to come out on their own. (Sounds like Georgie.)

actually, most dogs are good dogs - you have to be an above-average person to be a better friend than an average dog