If there were any one person who could have claimed the mantle of God-Emperor of Pop Culture for the past half-century, that person would be Stan Lee, who passed away today at the age of ninety-five. Off the top of my head, I can't think of anyone else who really comes close... George Lucas is known for a handful of movies, Steven Spielberg is mainly known for adapting other people's IP for the big screen. Stan Lee, however, presided over a stable of characters created in conjunction with other comics titans such as Jack Kirby and Steve Ditko. Not being a big comics fan, I couldn't even begin to summarize the hundreds of characters that Mr Lee had a hand in creating. Lee's passing has left a big void in the nerd community, and paeans to him abound in nerd outposts across the internet.

My first exposure to Mr Lee's personality was in his role as a narrator and occasional cameo in a now obscure 1980s cartoon version of Spiderman... this was decades after the classic 60s Spiderman cartoon which was my first introduction to Marvel comics characters. As I became more familiar with Mr Lee's oeuvre, I came to appreciate the New York City born and bred man's love for the city which I love so well myself. Lee's heroes, humans, mutants, aliens, demigods- all had to contend with the day-to-day problems of paying the rent, dealing with jerkass bosses, navigating family and romantic relationships, all while having to save the day on the regular. You could easily picture them on the streets of Queens, interacting with other local heroes:

Sure, with the exceptions of some hideous monsters, they were all good looking (a cousin of mine used to joke that even an elderly bag lady in a Marvel comic book would have a physique that Raquel Welch would envy), with idealized physiques, but they had the problems of typical New Yorkers. As an aside, here's a great 'Bloom County' strip lampooning the Marvel approach to depicting superheroines:

My favorite tribute to Stan Lee has to be The Onion's headline: Stan Lee, Creator Of Beloved Marvel Character Stan Lee, Dead At 95. Lee was very much a character, and a fan favorite, greeting his adoring public as 'true believers':

He also trusted his fans, not being the sort of person who talked down to them- I mean, here was a guy who knew that the kids who were fans of his creations would learn the meaning of his signature sign-off: "EXCELSIOR!" I have no doubt that he also came to know that his works provided a respite for marginalized persons- his characters were misfits, mutants, transhumans, aliens... a weird kid could look at a comic like The X-Men and gain hope of finding a family like Professor Xavier provided. Lee was unabashedly progressive, eschewing racism, sexism, and other bigotries. In the 1960s, he wrote columns against bigotry: 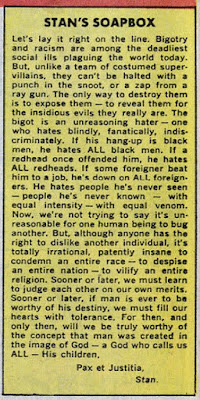 Last year, he made a video reiterating his commitment to civil rights and social justice, all while displaying his typical humor and panache:

Lee wasn't perfect, his treatment of collaborator Jack Kirby is considered by some comics fan to be a black mark against him, and he DID put the kibosh on Italian Spiderman, but he was a creative juggernaut who did his best to interject moral values into his sometimes lurid popular entertainments. I have friends who are genuinely upset at his passing, but Stanley Martin Lieber lived a good life, and a long life. I have no doubt that Stan himself would console them with a single, perfectly chosen word: EXCELSIOR!

it is a sad, sad day. you write a touching tribute though; excelsior to you, Old Friend! =D

may his memory be a blessing - and an inspiration