An Artifact from a Poignant Moment

This morning, I headed down to the dojo for the Saturday morning children's judo classes, and we had a special treat- two guest senseis from the USA National Judo Team. They are great role models for us senseis as well as for the kids. Our guests are lovely, lovely people, as the vast majority of judo players I have met throughout my lifetime, and it was an honor to have them with us.

As an added bonus, there was a traveling Olympic memorabilia display on hand as well. One of the featured items looked much like my father's lightsaber... it turned out to be the torch that Muhammad Ali used to light the Olympic flame during the opening ceremonies of the 1996 Atlanta Olympics: 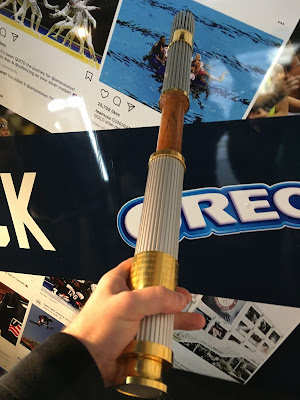 Holding the torch, which was pretty hefty (it felt at least five or six pounds in weight), I was reminded of the poignant ceremony, when Ali, stricken with Parkinson's disease. Watching the video, the thing that strikes me as amazing is how Ali, shaking from his ravaged nerves, holds the torch steadily, as if his will alone kept his arm stationary:

Holding the torch gave me goosebumps- besides lighting the flame for the 1996 Olympics, Ali competed in the 1960 Olympics in Rome, winning a gold medal in the light heavyweight division. There was a lot of history wrapped up in that torch, and being allowed to casually handle it was quite the privilege.