Last weekend, I headed to Yonkers' celebrated Ukrainian butcher shop to pick up some of their famous house-made kielbasy, and to see if they had put up a collection jar for relief for the Old Country.  Needless to say, they were flying the Ukrainian flag outside: 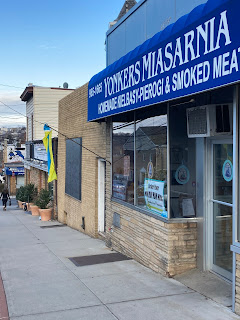 A couple of doors up the street, the Catholic Slovak Club (memories are long, and atrocities not so old) had a message of solidarity posted in the window:

Closer to home, in my neighborhood, many businesses had Ukrainian flags displayed, including the Aisling Community Center, which was formed to support the Irish immigrant community which makes up the backbone of the neighborhood.  Most of the bars, such as Fagan's Ale House: 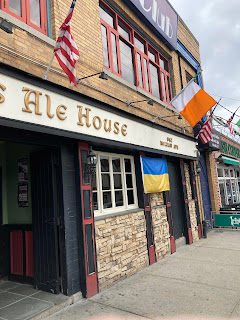 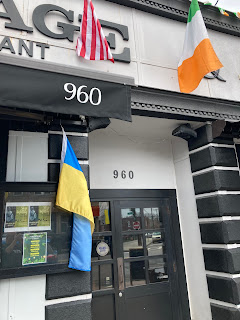 And Keane's were displaying the flag: 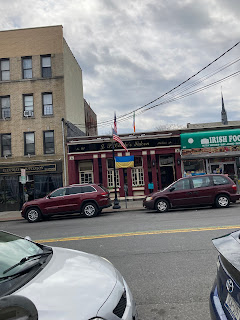 As well as such restaurants as the Irish Coffee Shop: 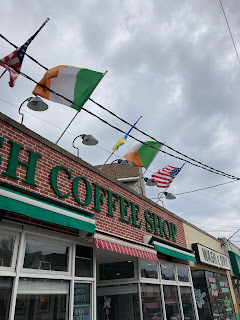 And the Healthy and Hearty takeaway shop: 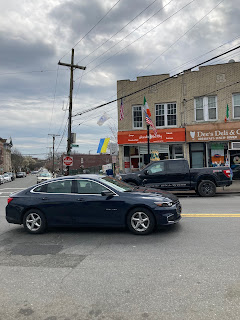 These are only the businesses I passed by today while running errands before heading off to work.  As I noted in an earlier post, the valiant resistance of a people against a hostile, larger neighbor (that uses famine as a weapon of genocide) is one that resonates among the people I am proud to claim kinship with through my paternal grandmother.  Back in the not-so-good days, the neighborhood still had some 'IRA Bars' (don't ask to many questions) running funds to the holdouts, but I haven't seen any evidence of gunrunning to Lviv.  Not yet.

In June, the Ukrainian Festival will be taking place at St Michael's Ukrainian Church, with all proceeds going to relief agencies.  It's important that our Ukrainian neighbors know that we stand with them in the face of this senseless war.