Some fictional characters are just too epic to be encompassed by a single actor.  When I was a wee boy, I saw the original Star Wars in the theater.  In the opening scene of this whiz-bang science-fiction film, depicting a shootout in a gleaming-white spaceship corridor, a discordant image appeared, a dark knight right out of a sword-and-sorcery movie:

Like most kids who first saw the film, this was a bit of a freakout, a menacing figure of nightmare, or perhaps knightmare, lending a Gothic touch to a space opera.  Appropriately, this archetype out of dark fantasy was played by a man who could have stepped out of a Frank Frazetta painting: 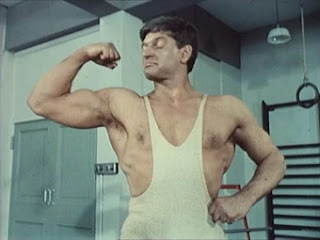 Well, David Prowse, who incarnated Darth Vader's menacing physique (James Earl Jones lent his sonorous voice to the villain), passed away at the age of 85 from COVID-19 complications:

So sad to hear David Prowse has passed. He was a kind man & much more than Darth Vader. Actor-Husband-Father-Member of the Order of the British Empire-3 time British Weightlifting Champion & Safety Icon the Green Cross Code Man. He loved his fans as much as they loved him. #RIP pic.twitter.com/VbDrGu6iBz

By all accounts, he was a lovely man, well-loved by his costars and his legions of fans, though his relationship with Star Wars creator George Lucas soured for some time.  The conventional wisdom is that Mr Prowse wasn't exactly happy that James Earl Jones' voice had been dubbed over his without his knowledge:

Mr Prowse didn't always play villainous roles, he was an iconic figure in public safety announcements (which were pretty crazy in the 70s) in the UK, playing superhero Green Cross Code Man, confronting children who crossed streets in unsafe fashion:

Hilariously, he resumed the role, which garnered him the Order of the British Empire, in the 21st century, telling adults to cross the street responsibly:

The man lived a good life, having a career as a bodybuilder and weightlifting champion before his acting career took off, and I recall reading that he developed a line of travel dumbbells which could be filled with water for working out and emptied to be packed in luggage.  Just reading people's reactions to his death, he comes across as a jolly, kindly man- the sort of guy who would let kids sit on his massive arms when he visited schools for his safety campaign, the sort of guy who would gladly pose with fans at conventions.  It's amazing that such a nice fellow could so adequately play the most iconic villain in the pop-culture canon.

He also trained Cary Elwes for his role in The Princess Bride, and for that good deed, Mr Prowse will always be in my good thoughts.

Yeah, he did a lot of personal training for other actors, such as Christopher Reeve in preparation for his role as Superman.

The best played villains are often said to be the nicest people in real life.
Sad to hear this gentleman has left us.

"It's amazing that such a nice fellow could so adequately play the most iconic villain in the pop-culture canon."

Too true. I found that out when I met Ray Park (Darth Maul from THE PHANTOM MENACE) years ago at a convention. He was incredibly kind, very nice to his fans and was game to taking pictures with those who wanted to. Even signed a Darth Maul picture for a friend.

Prowse also played Frankenstein's monster in one of the classic Hammer films with Peter Cushing playing Frankenstein. And of course both men ended up working together in STAR WARS EPISODE IV: A NEW HOPE (also Cushing was, by all accounts, a true gentleman, even though he did play villains in several films, including STAR WARS).