One of the biggest stories on the national news this week has been a spate of bombings in the Austin, TX metro area which killed two individuals and injured three. The initial two victims were two African-American men, Stephen House and Draylen Mason, who attended the same church- this suggested that the bomber was a white supremacist targeting prominent Austin African-Americans.

The bomber, who set himself up the bomb when the police were closing in on him, left behind a blog in which he detailed his pretty run-of-the-mill conservative views. He was homeschooled and a member of a survivalist group called Righteous Invasion of Truth (RIOT) which seems to have been pretty heavily into LARPing.

This terrorist left behind a video confession which was summed up thusly by an interim police chief: "It is the outcry of a very challenged young man talking about challenges in his life that led him to this point." To me, this is the ultimate expression of toxic male privilege and entitlement: "I hate my life so you must suffer." Maybe he just saw his victims as NPCs rather than as prominent members of a hated community, though the end results were the same.

Already, though, there have been attempts by the MAGA crowd to portray the perp as a liberal: 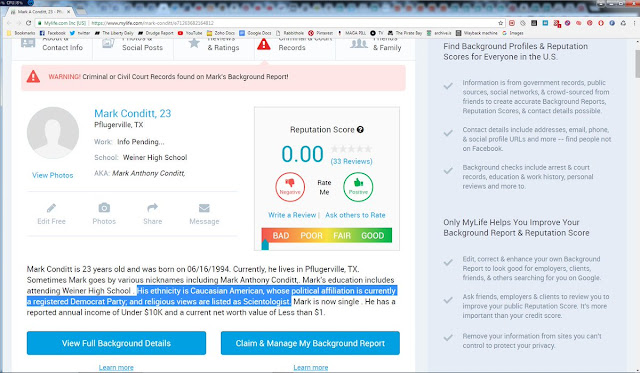 The 'tell' here, besides the tortured grammar, is the use of 'Democrat Party'. This particular right-wing shibboleth isn't the sort of thing that a background search company would use. To make the incompetence of this campaign is the misspelled hashtag- #AustinBoming. Uncle Vlad isn't getting his ruble worth out of these morons.

Enough ugliness for now, here's a performance of a song composed by Draylen Mason:

There are videos of Mr Mason playing the bass, but the uploader expressed a wish that media companies not use them. It's unspeakably tragic that this brilliant young man made national headlines for his death, when he should have made future headlines for his talent.

Although no one seems to ever understand this, we don't register with parties in the State of Texas.

Not that "political affiliation is current a registered Democrat Party" makes any sense grammatically anyway... but yeah, the lack of an "-ic" indicates that a Breitbart type was the source of the info.