Before leaving the house yesterday, I knew that I would be stuck at work for the long haul due to inclement weather conditions. I really didn't have time to cook anything to brown-bag, so I decided that I would cook on the job. I hastily sliced onions, carrots, and cabbage and packed some atsuage, fishballs, a bag of garae-tteok, and a bottle of soy sauce mixed with sesame oil and a 'glug' of sriracha. My plan, which could have been unsound due to the danger of a power outage, was to make a stripped down nabemono on the job, cooked on an electric burner purchased for the purpose of cooking nabemono. As luck would have it, things turned out well: 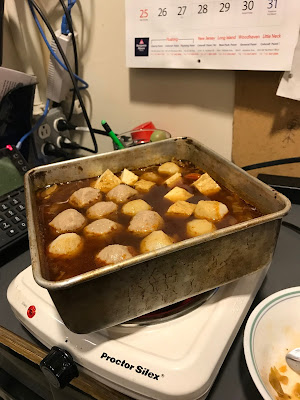 When I arrived at work, I texted my boss to let him know that I had made it one piece, and he called me 'intrepid' Yeah, the roads were bad. Around 5PM he texted me to tell me that he had lost power and heat at his house. He's a good guy, so I felt sorry for him, especially as I was just starting the process of cooking a somewhat elaborate menu item that would serve to fill me up throughout the night. I think I'll refrain from sending him that picture...