That's what they're calling it- the fourth nor'easter to hit the area in three weeks. The news radio station is broadcasting predictions of six to twelve inches of snow, with certain areas hit by up to eighteen inches of the stuff. Wind gusts are supposed to hit gale force. Needless to say, the governor has declared a state of emergency and urged everyone to refrain from non-essential travel.

So far, there are maybe two or three inches of snow on the ground. I left the house around 2PM and headed up to work for an overnight campout. This is the third one so far this month. The local roads in Yonkers were pretty messy, and the two downward slopes in the City of Hills (where nothing is on the level) gave the anti-lock breaks a bit of a workout- luckily, I was able to downshift so losing control of the car was never a danger. Once I hit the Sprain Brook Parkway, I had smooth sailing, being able to stay to main roads. The first thing I did was send a text message to my boss, to let him know that I had reached work in one piece and was equipped to stay overnight.

He immediately called me to ask what the weather conditions were like. He lives north of here, and the snow hadn't hit there yet. He had bought eighteen gallons of gasoline for his generator because he lost power in the last nor'easter. He asked me to send a picture of the snow, because his wife was skeptical about there being snow on the ground. I have to say, it looks absolutely lovely, though I could live without this beauty in late March: 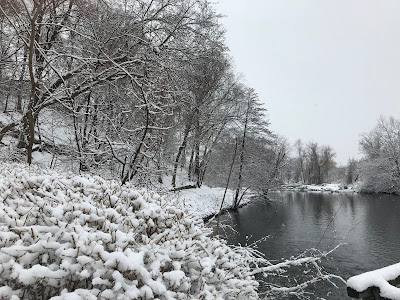 The color doesn't show up well in the photo, but there are yellowish-green leaflets (Nature's first green being gold) on the trees waaay in the background of the shot, center right. It's Spring, and I saw some robins that I'm now worried about, but we might be shoveling snow until April if this storm picks up and becomes the monster that they predicted.

speaking of robins, a few days ago i saw about thirty robins at once, the first time in my life i have seen so many together (and i am a time traveler from the 20th century, and technically speaking from the first half of the twentieth century) which i deduced were migrating north together (i am in maryland, in the dc metro area) - one was eating a worm even as i observed them

I saw two robins this morning, a mum and dad. It was pretty nice here today in Ontario, sorry about your weather!

Nice sightings. I am concerned about the killdeer I'd seen onsite last weekend, but they are probably taking refuge near the water.