Now We Are Five

In a quiet moment in this busiest of months, it struck me that my friends and co-workers Fred and Ginger, our Rodent Abatement Team, are five years old. A former co-worker of mine takes care of feral cats and tries to find homes for any kittens born to her charges. Fred and Ginger weren't quite kittens when they arrived, being about six months old. When they arrived on-site, they were shy. I was able to gain their confidence early on, to the extent that Fred followed me from one end of the property to the other, a distance of about half a mile, after a night of our fundraiser. From that night forward, I've referred to Fred as my little dog. I've never known a cat to shadow me in such a fashion. Ginger prefers to bounce hither, tither, and yon- checking out interesting sounds, sights, and smells even as she generally paces me and her brother.

Originally, Fred and Ginger worked in the same building. We had an older cat, Moses, working in another building on site. Sadly, Moses succumbed to cancer last year, and Ginger was promoted to work in his former "Rat Patrol" area. They have plenty of time to socialize with each other during the day, when they have the run of the grounds, and they both have their niches in the lounge/kitchen area for the day shift. 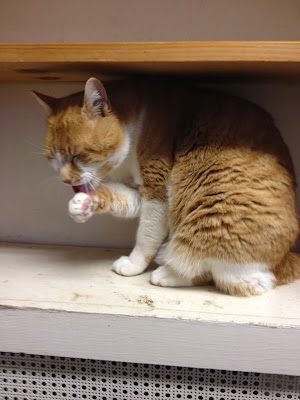 Ginger's found a nice little spot on top of a radiator cover and underneath a counter: 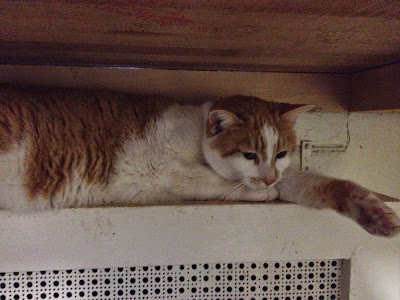 Having two such charming co-workers is a genuine treat for a guy who spends most of his time on the job working solo (as far as other bipeds go). I have had a lot of fun with Fred and Ginger over our five years together. I vividly remember my first encounter with one of them, flitting around the shadowy interior of a rather large building, unsure of the primate who just walked through the door. In those days, even I couldn't tell them apart.

Post title kinda sorta yoinked from A. A. Milne.

By far, my most popular post was about that weird-but-delicious red bouncing-ball fruit. You should put up a post about those.

They are cute little beasties.

Just tasted my first one of the season. Most of them are still not quite ripe.