This being the season when my weekend workdays give me no opportunity for peaceful "alone" time, I figured I'd schedule a post with some pretty pictures. When I visited Kingsland Point Park in Sleepy Hollow to watch a giant crane "limbo" under the Tappan Zee Bridge, I took a couple of pictures of the Sleepy Hollow Lighthouse, which was built in 1883 and decommissioned in 1961. 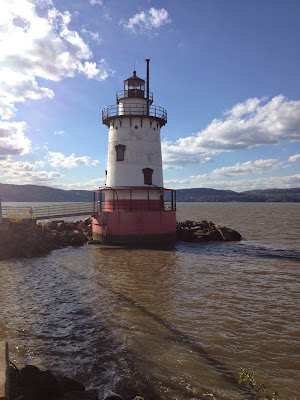 Up close, it looks like it could use a touch-up paint job: 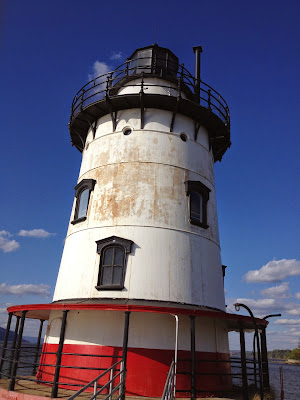 The area is such a pretty one, it should be more of a tourist draw. Sadly, the visitation hours of the lighthouse are way too scanty:


Local scuttlebutt (I'm not naming names) has it that the guy who runs the site doesn't have the time to run it, but doesn't want to step down from the position. I don't know how much it would take to run the lighthouse on a regular basis, but I sure wish somebody would make a go of it. It's a fascinating building, and its setting is unparalleled. I don't want to create a local controversy- this is a plea, not an accusation.

Just as the title of my "crane" post was cribbed from a tune by TMBG, this one is as well:

Why buck a trend? I'll have to see if any other TMBG songs match up with park features...

Looks like one has plenty of time for fishing.
~