My friend Peter has been in town for the past couple of days. He has been residing in San Diego for a while, but his parents still live in Yonkers. The family visited Prague, where Pete's parents were born, for a family reunion, and Peter stopped in New York to visit friends.

Over a decade ago, Peter wanted to learn everything there was to know about a very, very, very specific subject that had little-to-no practical value. He finally settled on the whiskys of Islay. He purchased a bottle from each of the distilleries located on the island, and tracked down a bottle from the Port Ellen distillery which had just closed. It was a bottle of the 1980 vintage 18 year-old whisky: 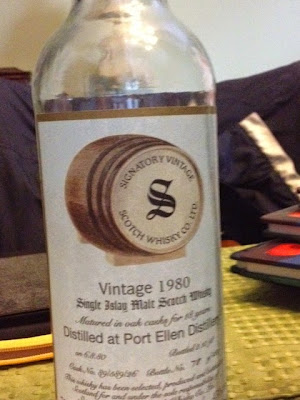 Back in the day, Peter had arranged a tasting for a bunch of us, with bottles of each of the whiskys and water and ice if we didn't want our whisky neat. I usually drink my whisky with the tiniest "teardrop" of water- dip the finger in a glass and add one drop, please. In the course of the event, we partook of the 1980 18-year Glen Ellen. On Sunday, a bunch of us got together and Peter busted out the bottle, which is about half-full.

If you look at the collectors' prices for Port Ellen scotch, they range from hundreds of pounds to thousands of pounds. If it had remained unopened, Peter's bottle would probably have been worth about $750-800. Sharing the bottle was worth a lot more, and he'll be bringing the bottle back with him to San Diego, where one of his co-workers is a Scotch aficianado. The whisky is a rarity, and it will be a treat for this guy to try a nip of such a nonesuch.

I take a pretty dim view of "collectors", probably due to the sort of people who hoard comic books and toys, driving up the prices so that families with little kids can't afford them. Toys were meant to be played with, books to be read, and whisky to be drunk. If Peter had held onto the unopened bottle, he could have sold it at a handsome profit, but the stories that he'll be able to tell about sharing the scotch will friends are so much more valuable.

As I have mentioned, in the course of the madness of the '90s I found myself ideally positioned - a computer/file system/database nerd in the heart of Silicon Valley - and by merely tucking in my shirt and keeping the drooling and flatulence to a reasonable minimum was able to intercept a respectable share of the large denominations of cash that were flying around in search of the next Netscape/Webvan.

In the shadow of Intel in the Mission College neighborhood of Santa Clara, there is a very high end tech ghetto that includes some pleasant eateries. My little group became enamored of a place called Birks, an upscale steakhouse/California Cuisine restaurant that catered to geeks with dough.

Even in those days, Port Ellen was grimly rationed, as they had a set number of barrels they'd bottle each year, and that was that. So the guys at Birks would charter a Learjet and go to Ireland and bribe the necessary people to come back with a sufficient supply.

I loved it, even at $90/shot, and we'd sit there and drink a thousand bucks of scotch between four or six of us. I was fascinated by how pale - almost clear - it was, and the rich subtleties that compared so favorably to the Laphroaig from next door on the Island.

Needless to say, those days didn't last, and my life as a bigshot in a Porsche convertible is nothing but a fond memory that seems more like a dream. But for a few precious years, good scotch and laughter were a part of a healthy diet...

I find Bowmore to be the strongest, most "medicinal" of the Islay scotches. My personal choice of single malt scotches is Balvenie, though Glenmorangie is also dear to my heart. The Islay scotches tend to come across as peatier.

Ha! I read the post and thought "This is Mikey-bait".

I was fascinated by how pale - almost clear - it was

Whisky is colourless when first distilled, and is still very pale when it comes out of the barrel, but then the distillers decide how much they want to darken it with caramel to distinguish it from other brands.

A mate of mine (Tony Coxon, the maven of multidimensional scaling) went to run a B&B on Islay when he retired from academia. I had an invitation to go and stay there and be steered around the distilleries.

Peter wanted to learn everything there was to know about a very, very, very specific subject that had little-to-no practical value. He finally settled on the whiskys of Islay.

Too bad that he failed miserably on the "little-to-no practical value" bit, eh?