The big local story on the news was the arrival of a super bigass crane to the Tappan Zee Bridge construction site and its subsequent journey under the bridge, conducted during the low ebb tides caused by the full moon (unless you're Bill O'Reilly).

I headed up to the gorgeous Kingsland Point Park in Sleepy Hollow, NY to take in the scenery and to watch the giant crane being moved: 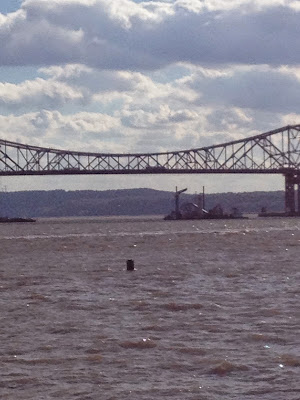 I can't wait until they erect that sucker. I've always been fascinated by heavy machinery... I'm pretty much an overgrown eight year-old.

Post title yoinked from one of my favorite TMBG tunes:

A friend of mine discovered the "Giants" after their Flood album came out, and remarked how whimsical the band was. I set him straight, TMBG may have had a whimsical facade, but the vast majority of their songs were about heartbreak, ennui, and disillusionment. The audio of the official video for They'll Need a Crane is clearer than the live version. Just listen to the bridge and tell me that these guys were ever in it for the laughs.

Just listen to the bridge
ISWYDT.

I'd like a picture of a crane sitting on that crane.
~

I'd like a picture of a crane sitting on that crane.

Cranes all the way down! We don't get cranes in these parts, but we have plenty of herons and egrets.