This year, I was ecstatic to note that a pair of wood ducks chose my principal worksite to raise a family. Longtime readers may recall that I am partial to the birds, which are often considered the handsomest of the North American waterfowl. I had noticed a couple of the ducks on the property last fall, probably mid-migration, and I was happy to see that we had a spring-to-fall presence of the ducks.

A couple of weeks ago, I saw the drake foraging with a bunch of other ducks and geese. The wood ducks tend to be shy, so he led the other birds on a pell-mell run to the pond on site. He's the handsome bird on the left-hand side: 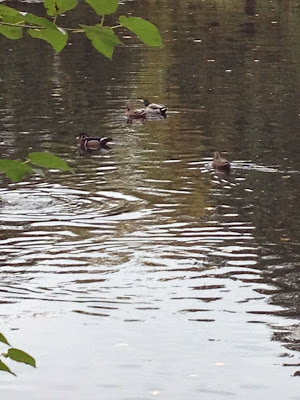 Ordinarily, the geese would linger on land, cropping grass, not fleeing unless one were to actively chase them. The handsome drake, though, is shy. I haven't seen much of him, more frequently coming across his gal pal and their ducklings. I think this winter, I may cobble together a nesting box to attract additional wood ducks to the site.

I'm partial to Gabrielle Drake, myself.