Tonight, my great and good friends of the Secret Science Club are presting a Zoom lecture featuring geophysicist and water expert Dr Giulio Boccaletti of the Smith School of Enterprise and the Environment at Oxford University. Previously, he has been affiliated with Princeton, the Nature Conservancy, and MIT. He is the author of the book Water: A Biography.  He is also an ocarina virtuoso.

Dr Boccaletti began his lecture with a quip about how he is calling in from London, where it is late night, so he might be interrupted by an irate neighbor.  He then discussed the summer of 2021, which has been marked by long-term droughts in the North American west and floods in New York, Germany, and China.  Something is going on, which provides a context for his book.  As an environmental scientist, he has been waiting for a train crash for rwenty years.  The chemistry of the atmosphere is changing, and water is the principle chemical agent in this change.  Politics and an aging infrastructure are also factors in our current crisis. We can't understand where we are going without knowing where we came from.

The story of water is not technological, but political.  As towns grow and farms expand, people forget why structures such as dams and levies were built.  Institutions form in the shadow of infrastructure and people are forced to respond to changes in levies and reservoirs.  What is most engineered is not landscapes, but political institutions.

Dr Boccaletti indicated that he would be presenting vignettes depicting the history of water.  Liquid water appeared on Earth 3.8 billion years ago, either off-gassing as the planet cooled or, more probably, brought from asteroid impacts.  The water that you drink probably passed through a dinosaur's kidneys long ago.  The amount of water on the planet is fixed- most of it is in the oceans, some is in the atmosphere, some is locked in the ground.   Dr Boccaletti displayed a diagram showing the distribution of the world's water: 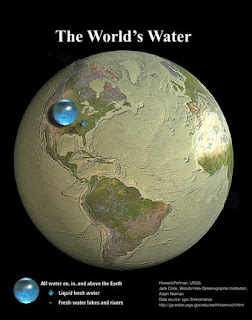 Much of the sun's energy is intercepted by water, which evaporates and eventually falls as rain.  The scale of the energy pouring onto the Earth is vast, about 170K terawatts.

Hominids have been on the planet for about 5 million years, and H. sapiens has been around for about 300K years.  Only in the last 10K years have humans been civilized, we decided to stand still in a world of moving water.  The story of our interaction with water is a story of two opposing agents of environmental change.  Water determines whether we have food or not.  Dr Boccaletti showed us the Babylonian map of the world depicting the Tigris and Euphrates rivers as the center of the known world.  He then spoke of the legend of Utnapishtim, the survivor of a global flood.  The Great Flood narrative is worldwide, there are examples from the Americas, and throughout the Old World.  Our civilized origins are born of water.

Water has always had a role in the development of political institutions.  Showing a vase depicting Greek hoplites, the farmer-soldiers who were wealthy enough to arm themselves and demand a role in government.  Their wealth was due to the rich, rain-fed farms that they owned.  Other regions of the planet weren't lucky enough to be able to farm using rainwater alone.  The governments of the Greek city states inspired the Roman republic.  Ultimately, the Greek and Roman forms of government led to the underpinnings of the modern state.  It wasn't a given that this particular area of the world would have had such a lasting impact.

Dr Boccaletti then discussed his hometown, Bologna, a landlocked Lombard planned city with a heyday in the 11th to 15th centuries.  Behind the city walls, there are canals, now mostly underground, to power the economy of the city, which was known for its textile mills (such as silk and hemp mills) powered by water, the primary source of energy for industry.  Bologna was also home to an early university.  In the university archives, the Justinian Corpus Iuris Civilis, much of the jurisprudence in the Corpus dealt with water rights, some of which made it into the Magna Carta, which entails water rights for the Thames.  Ideas of territorial sovereignty dating to issues of rights to land recovered from floods, are still extant today.

The topic then shifted to the geopolitics of water in the 17th century.  Dr Boccaletti showed us a picture of the Fontana dei Quattro Fiumi in Rome, which represented globalism, and a call for a resumption of Papal authority.  Many of our modern institutions have their roots in this era, and water infrastructure was a crucial factor.  Dr Boccaletti cited the engineering of the Dutch polders and the draining of the Lincolnshire fens, and the treaties of Westphalia and Munster, which dealt with access to rivers.

The 18th and 19th centuries were characterized by globalization and colonization.  The Constitution of the United States regulates commerce, much of it fluvial.  Dr Boccaletti joked about talking about the Constitution with a primary audience, but the interstate commerce which was central to much of the founding documents inspired him to do so.

Dr Boccaletti described the 20th century as the hydraulic century.  He discussed the Tennessee Valley Authority, noting that the region, with its u-navigable river, was plagued by poverty, malnutrition, pellagra and other diseases.  Roosevelt wanted to bring cheap power to this area, and without high-voltage transmission capacity, Roosevelt decided to bring hydroelectric power by harnessing the river.  He used his authority to harness the power of the rive to turn the lights on.  The project had political overtones, the development of water resources had an enfranchising effect, bringing power to previously powerless persons.  The idea of the TVA was not only successful in the US, it was brought to Jordan, the Awash River in Ethiopia, and to Helmand in Afghanistan.  Currently, our reservoirs capture about twenty percent of rainfall worldwide, we 'replumbed' the planet.  The perception was that we conquered nature, a misconception which set us up for failure in a changing world.

Currently, the US and Europe have stalled in water projects, while China forged ahead with the Three Gorges Dam, which incorporates 28 million tons of concrete, a 600 kilometer reservoir, generators providing the power of ten Hoover dams, and flood control. The dam flooded artifacts, displaced over a million people, and changed the ecosystem of the river, endangering many species.  Currenty, the Yangtze River drainage basin is being dammed for power projects.  Chinese finance and expertise is now being brought to many parts of the world, particularly Africa and Asia.

Catastrophes are a powerful political motivator.  Struggles with nature are always used as a measure of control, and the illusion of state power to control nature is fragile.

The lecture was followed by a Q&A session.  The opening question regarded Roman aqueducts.  Dr Boccaletti noted that most of the aqueducts were private endeavors, with the emperors occasionally building one.  They didn't represent the power of the state, but of wealthy persons.  Regarding water, the state power was centered in the ports, which enabled crops from far-off provinces to be brought to Roman.  The vast trade system offset small irrigation systems.  The sewer system, such as Rome's Cloaca Maxima, is still in use.  Regarding floods, there was some private land, which made building levees difficult.  Romans responded to the threat of flood by building on hills.

Another question involved the impact of agriculture on underground aquifers, such as the Ogalalla Aquifer.  These aquifers are reliable water sources, provided that the ability to pump water is available.  These aquifers are being depleted.  In California, rivers are disappearing because ground water levels are dropping.  The story is entirely agriculture-based, the Colorado River is largely being depleted by agriculture, which involved great federal infrastructure and agronomy projects.  San Diego, for example, could not exist without these projects.  It's a complicated problem to answer. What do you want your landscape to look like and who should live there?

Some bastard in the audience asked about desalinization and capture of atmospheric water vapor to supplement drought-parched regions.  Noting that there is no silver bullet, water desalinization is very expensive but can be used on a municipal basis.  There is a limit to the energy available to desalinate water, there is a floor on the price, even at sea level.  Pumping the water upstream raises the cost.  Desalinated water is simply not economical for agricultural purposes. So far, atmospheric capture is impractical, but there are some interesting technological developments.

Another question involved the possibility of upcoming wars over water.  Is the burgeoning water crisis coming to a head?  Most nations and most societies are failing to develop the infrastructure they need to manage water.  The world is not running out of water, but access to water is varied.  Dubai exists.  Many people have problems with access to water, but most people are in the middle, with their access to water not exactly secure.

Regarding the use of technology to resolve our water crises, individual actions are insufficient.  Dr Boccaletti mused about what an environmentalist republic would look like.  The climate solution is pushing societies to address environmental needs, but there is the problem of using public power to, say, relocate populations.  Technology is a powerful instrument, we are in a golden age of Earth monitoring, but the power of the commonwealth, collective agency over environmental problems, is necessary.  Technology has a role to play, but not as great as one might think.

The last question involved the 'replumbing' of the planet with dams and reservoirs.  This didn't change the climate in a planetary sense, because atmospheric water vapor was unaffected, but it had political effects- Dr Boccaletti cited Stalin's demands for increased cotton production in the Aral Sea region.  The damning of rivers in Uzbekistan, caused the Aral Sea to dry up, and the increasing salinity has made recovery of this body of water impossible.  The local effects were drastic, but the effect on the global scale was negligible.

Once again, the Secret Science Club served up a fantastic lecture.  Kudos to Dr Boccaletti, who stayed up past 2AM, Margaret, and Dorian for a fantastic evening of topical science, presented in unambiguous terms.  For a taste of the SSC experience, pour yourself a nice beverage and check out this video of the good doctor discussing the future of water security

Now, sit back and soak in that SCIENCE!

He's a great lecturer and activist, speaking about a vitally important issue.