The effectiveness of a Democratic candidate can be determined by the intensity of Conservative attacks against them. Therefore, Kamala Harris' effectiveness after the second Democratic debate has spawned a bullshit campaign questioning her identity as a black woman. The coordinated troll campaign reached its nadir when Uday retweeted a notorious right-wing whacko and fraudster: 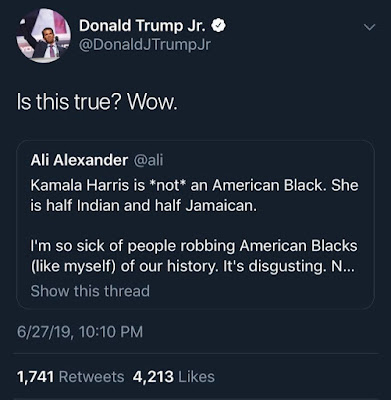 The 'inorganic' nature of this campaign was apparent from the start because so many of the social media posts were repeated verbatim. The anti-Harris campaign was amplified by the outré ADOS (American Descendants Of Slaves) 'movement', which seems to be a group of trolls trying to drive African-Americans away from the Democratic Party, and more troubling, trying to drive wedges between the various sub-populations of the African Diaspora. ADOS is a blend of Trumpism and gatekeeping... it's a more under-the-radar version of Candace Owens' grift-y Blexit. I'm a white dude, but I look askance at the ADOS contingent because, while Amadou Diallo's family never lived under Jim Crow, his 'blackness' was not questioned by the police officers who slew him. Some of them are even claiming that Kamala Harris' father was a white Jamaican descendant of slave owners. While the particular history of one enslaved Diaspora group differs from the history of other groups, their descendants tend to share the same experience of discrimination- racial profiling, redlining, and harsher police treatment.

Reading about this troll campaign, the phrase 'Schrödinger's Blackness' popped unbidden into my mind... to Conservatives, the 'blackness' of a Democrat of African descent is uncertain until a determination is made of the particular needs of a campaign, by which I mean smear campaign. Right now, while ratfuckers are trying to undermine Kamala Harris' support among African-American voters by claiming she's not a genuine 'black American' (sic), those very same ratfuckers will accuse her of being an 'angry black lady' when it suits their needs. These arbiters of blackness, many of them black Russians, are not acting in good faith. Meanwhile, decency prevails in other quarters. It's good to know that the pushback has been well-coordinated... Kamala Harris knows her lived experience, and can define her own approach to her African Diaspora heritage. If she wants to use this classic as her campaign theme song, she can do as she damn well pleases.

ADDENDUM: I googled the phrase 'Schrödinger's Blackness' and only came up with one other instance of its use, for a concept which differs from my use of the term, but that I suspect will also be used as a weapon against Kamala Harris.

They're already trying to find a birther variation for her, huh? I heard Obama criticized (?) because he wasn't the descendant of slaves, either. But in both cases, they were half black and rose up the ranks in spite of a system that discriminates against black people.

I think Harris can handle the crazy talk.

I think your Schrödinger's Blackness concept nails it.
Nice work.

I won't vote for Kamala Harris because she was a prosecutor. She was"tough on crime" and she probably put innocent people in prison. So basically she is a supporter of the white supremacist, militarized police state that we all live in. Do not put a cop in the White House.

"The whole good cop/bad cop question can be disposed of much more decisively. We need not enumerate what proportion of cops appears to be good or listen to someone's anecdote about his Uncle Charlie, an allegedly good cop. We need only consider the following: (1) a cop's job is to enforce the laws, all of them; (2) many of the laws are manifestly unjust, and some are even cruel and wicked; (3) therefore every cop has agreed to act as an enforcer for laws that are manifestly unjust or even cruel and wicked. There are no good cops." ~Robert Higgs