It's another year around the sun for me. Personally, I'm doing okay, but I can't help but feel that somehow, the world has gone radically wrong in the course of my lifetime. I was born during the apogee of the Space Age, but Flat Earthers not only remain among us, but seem to have a larger cultural presence that they would have a few decades ago. The problems of racism and misogyny haven't been solved, and again there seems to be a backlash against the gains made by women, people of color, and LGBTQ people. It's tough to pinpoint exactly when things started going wrong, but I lay much of the blame on Reagan, who cheerfully pushed the lie that government was the major problem in people's lives, and that unions were greedy institutions preventing Joe Schmo from becoming a millionaire. The demographic shifts that our country is experiencing are something I am comfortable with- I spent a lot of time in the Bronx as a kid, and when I lived in New Rochelle, NY, there was already a vibrant community of Mexican immigrants whose culture and language I came to love. While I was fully aware of our nation's questionable foreign policy in places like Latin America and the Middle East, being the sort of kid who started reading the newspaper in kindergarten (my mom loves to tell the story of the time I didn't want to go to a friend's birthday party at an amusement park because I had read about a ferris wheel accident in Durban, South Africa), the current cruelty is something I never would have predicted. Years ago, I still thought that the nation I grew up in was fundamentally good... I sure hope it is, and that the current shitshow is a temporary phase.

I wish I could say that the half-century I've spent on the planet was marked by progress, but I don't see it. Again, personally I am doing okay, I am surrounded by friends and a loving family, and I even work in a gorgeous place. I might be looking a little craggy lately, largely as a result of keeping horrendous hours, but generally speaking, life is good... I mean this is me at work: 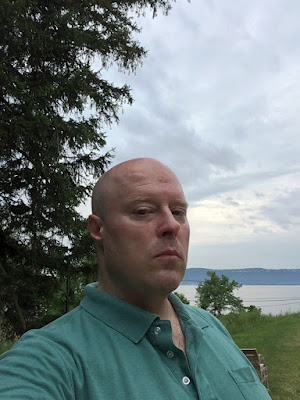 It's a funny week, a lot of my friends and one of my uncles were born around this time of year- today marks the start of three days of celebrating birthdays. Sure, the promise of the era of my birth has been squandered on five decades of missed opportunities, wasted potential, but I'm doing okay, and the people around me are doing okay, and I am still optimistic enough to believe that we will be working to make things better. Things had better get better.

You know back in the day Reagan wrote Richard Nixon a letter something to the effect that with regard to JFK beneath that tousled hair and boyish grin was a true Marxist. That would be the same Reagan who after he left the White House ended up setting with the IRS for around a million dollars for
"stuff" that came his and Nancy's way as President. And Nixon, of course, had a count of tax fraud in the draft articles of impeachment. So, yeah, real Americans like the present orange clown who I expect to end up in ADX Florence.

I don't know. Some things get better, some get worse, it seems like to me. The overall direction of equal rights in this country seems to be in the direction of slow improvement - the backlash is inevitable and can't change that.

But the rights we have, particularly when it comes to economic decisions, seem questionable. I know we're all supposed top be thrilled about how each of us is a brand able to sell ourselves on the open market as we see fit, but it really feels to me like we're fighting over equal sized pieces of a smaller and smaller pie.

Most of us are, anyway.

Hope this next trip around the sun is a great one for you!

Thanks, folks. It was a good celebration last night- Korean BBQ and a generous amount of soju with good friends. Tonight and tomorrow will be rounds two and three.

Well, enjoy the fellowship and celebration-you deserve it! We appreciate the work you do, both here and outside of here. We are all working hard to make things get better, and that has to have some results somewhere. Forward!