This has been a pretty bad week here in the NY Metro Area- three days of terrorism targeting New Yorkers, both in the City and here in Westchester County. I decided today to take a mental health break before heading to work, so I headed over to Yonkers' own Hudson River Museum to take in Maya Lin's A River Is a Drawing exhibit. This exhibit, which runs until January 20, 2019, is Ms Lin's love letter to the Hudson River and the planet- it showcases her dedication to environmentalism as well as her artistic brilliance. A River Is a Drawing has 'taken over' the museum- visitors are first greeted in the lobby by Pin River—Hudson Watershed, which uses over 20,000 pins to map out the Hudson River Watershed: 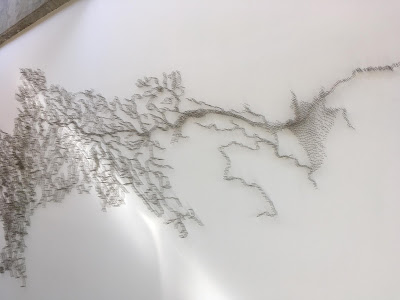 From the lobby, I proceeded to the courtyard, which featured two installations- the first being Reed River. a bamboo and bluegrass representation of the main course of the mighty Hudson, with the gorgeous gilded age Glenview mansion providing a lovely backdrop: 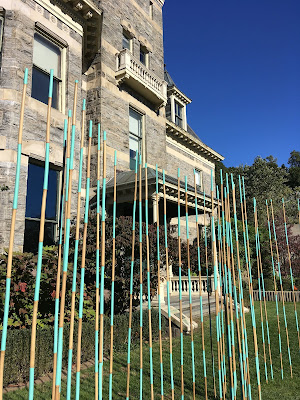 Next up was Concrete River, in which Ms Lin played on the dual meanings of the word 'overlook'- she painted the normally overlooked cracks in the concrete pavers near the scenic overlook giving a vantage of the river: 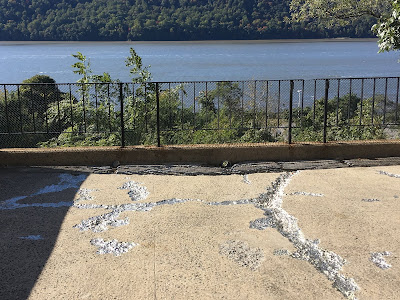 In the main floor galleries, Ms Lin acted as curator, displaying favorite paintings from the Hudson River School that reflected themes of industrialization and environmental challenges.

In the stairwell going down to the next level of the museum, there was The Hudson Bight, a wonderful topographic depiction of the Hudson Canyon, the seafloor at the mouth of the river which was gouged out by glacial forces during the last Ice Age: 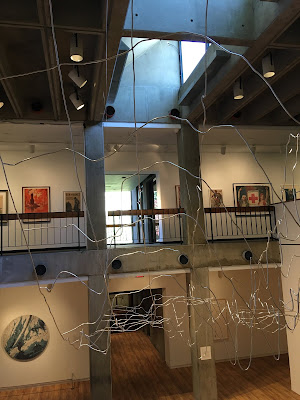 In the lower level, there was a sculpture based on the proposed geography of the Laurentide Ice Sheet, which gouged out the Great Lakes, the Finger Lakes, and Lakes George and Champlain: 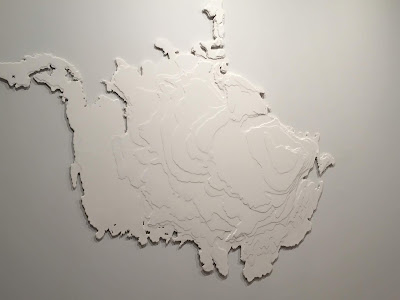 Another beautiful depiction of the river and its outflow into the Hudson Bight and Long Island Sound was rendered in recycled silver: 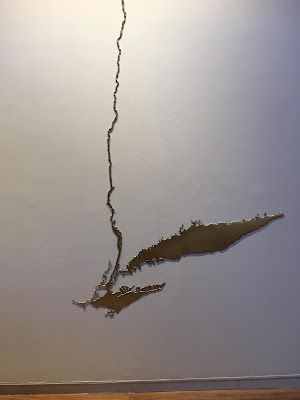 A combined map and timeline featured a depiction of the watershed surrounded by quotes about the river in historical order: 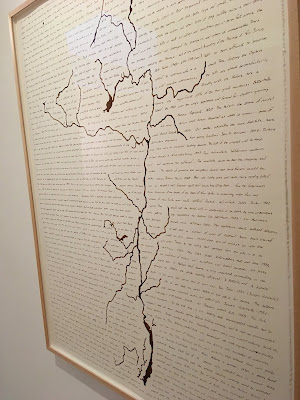 My particular favorite quote was Washington Irving's lament about the construction of the Hudson Railroad line, which ran past his home, Sunnyside, and caused a cove in front of his house to silt up and become a marsh: "If the Garden of Eden were now on earth, someone would try to put a railroad through it."

Perhaps the most dramatic piece in the exhibit was Folding the River, a depiction of the Hudson watershed made from recycled green glass marbles which sprawled across the floor, up one wall, across the ceiling and down another wall. I tried to take a panoramic photo of the piece, but pretty much botched it:

The location of the Hudson River Museum corresponds with the area where the floor and wall meet.

There was a sobering depiction of what New York City would look like by 2100 if there is a four degree Celsius rise in temperature: 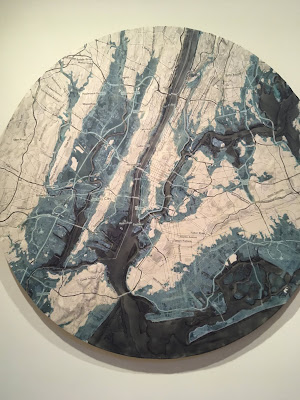 Maybe this wasn't the sort of art to take solace in, gorgeous as it was. The exhibit ended with a challenge, a link to Ms Lin's What Is Missing? project, which is a memorial to the species killed off in the current Sixth Mass Extinction. Along with this call to action was an invitation for exhibit attendees to write down their own experiences with the Hudson and to post them on the wall.

The exhibit was marvelous, and the idea that such a titan of the American arts as Maya Lin would display such an elaborate exhibit in my beloved Yonkers was warming to my heart. If you are in the NYC metro area, consider a trip to the Hudson River Museum. Admission to the museum is a mere seven dollars, and the museum is easily accessible by Metro North- the ride from Grand Central to the Glenwood station on the Hudson Line is breathtaking. Come to Yonkers, especially if you've been having a bad week.

Thank you for this wonderful piece! I hope that you sharing it with us has helped, too. Best wishes from Kansas.

Thanks, Ali. I always look forward to your comments.

the mention of the hudson river school of painters reminds me of Thomas Cole's 1840 series of 4 paintings "The Voyage of Life," which is one of my favorites at the National Gallery of Art.

i first encountered this set of paintings as an elementary school child on a field trip, while living in northern virginia, six decades ago

I'm so glad you enjoyed it, charley. Our little museum is a wonder, so I feel obligated to mention it periodically.