The Embodiment of Nuclear Fears

This has been a weird week... the very week of the anniversary of the Hiroshima bombing has seen an escalation of fears that North Korea will join the 'nuclear club', and the death of Haruo Nakajima, the actor who played the monster in the 1954 film Gojira. The eponymous monster played an embodiment of the national post-traumatic stress disorder felt by the Japanese populace after World War 2, especially the atomic bombings of Hiroshima and Nagasaki.

Mr Nakajima's portray of the hulking villain of the movie was nothing short of heroic, as the suit he wore weighed more than two-hundred pounds:


"Since materials were so rare, things like rubber were not available. Instead, they used ready-mixed concrete, so it weighed about 100kg. It was so heavy and hot, and with the lighting, it was even hot just to touch it. I was sweating all over my face, but I did the best I could."


Being perfectly suited to the role of Gojira, Mr Nakajima continued to play the role of the monster throughout the transition of kaiju movies from horror to science-fantasy to camp until 1972, when he played the monster in his throwdown with Gigan:

The 'kaiju vs kaiju' movies which featured the formerly villainous Gojira as a hero form the greatest 'professional wrestling' act in entertainment history, with the horror of destruction undercut by the 'moves' of the outrageous monster combatants. The tragedy of the 1954 film transitioned into farce... which brings us to our current nuclear kerfuffle. The Trump vs Kim rhetorical rumble is an outlandish one... a fight between two spoiled narcissists with bad haircuts who never could have succeeded on their own merits. It's like Trumpzilla: 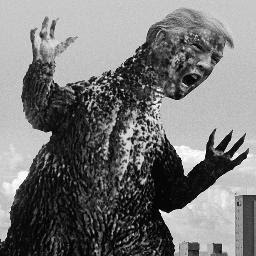 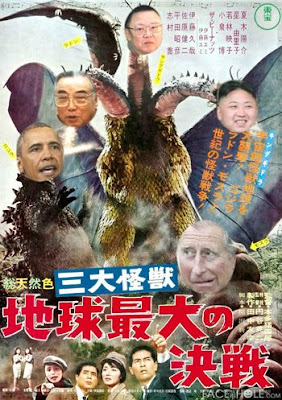 Of course, while farcical, this conflict is also deadly serious, and potentially tragic. The last thing we need is a Commander in Chief who ad-libs nuclear threats while the U.S. diplomatic corps is being hollowed out. Trump sounds as loony as Kim Jong Un, being as bellicose and ignorant of consequences as North Korea's boy wonder.

I really feel bad for the people of Guam, Japan, and especially South Korea (Seoul being vulnerable to artillery strikes). For a reasoned analysis of the Korea issue, I recommend reading mikey's take. In the meantime, I really can't freak out over this issue... I'd like to think that cooler heads will prevail while the two kaiju-in-chiefs confine their conflict to a war of words. In the meantime, I think I will honor the life and career of Mr Nakajima by listening to Akira Ifukube's glorious theme to the Gojira movies:

Mr Nakajima's turn in the suit ranged from 'figure of nuclear horror' to 'big green defender of the planet'. I don't expect a heel-face turn from either Trump or Kim, neither of them has the brains of a radioactive dinosaur.

That is pop culture referencing done right, tied into a neat package.

Thanks for the mention! Currently working on an update focused on the Hwasong-14 missile capabilities and the process of deterrence (by both parties)...