In the wake of the Charlottesville Emo-Boy Nazi riot, and the murder of Heather Heyer, there has been a movement to name and shame the Nazis who attended. Now, we have the firings- Nazis working in a Minnesota diner, a Nazi hotdog boy was fired, a Nazi chain-pizzeria cook was fired... it's pretty clear that a lot of employers do not wish to deal with the public outcry against Nazi employees.

The real sad joke is that most of these guys seem to be in low-level service industry jobs- they are hardly emblematic of the 'superior race' they claim to represent. Meanwhile, the public face of the current neo-Nazi movement is a trust-fund kid, the son of a wealthy cotton heiress. This is a guy who probably won't have to work a day in his life, a guy who doesn't have to face the prospect of being fired for his shitbaggery. He reminds me of a Confederate plantation owner who was exempted from conscription precisely because of his wealth, while poor boys were expected to jump into the meat grinder for him.

I have no sympathy for the Nazi-morons who have lost their jobs, and find this tweet hilarious: 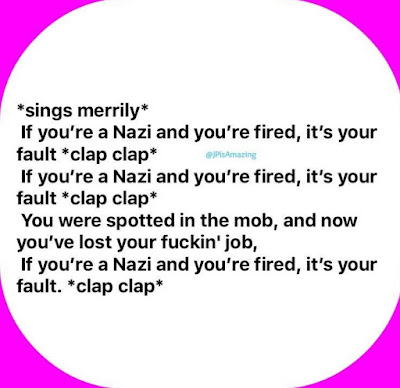 That being said, these young alt-right scrotes really need to realize that they are being exploited by creeps like Spencer, lest they face consequences that they aren't equipped to face... that sort of thing is no fun. These idiots should have learned that by reading about Pickett's Charge.