While running some errands, I stopped into my butcher shop of choice (yes, I live in a neighborhood which still has not only one, but two butcher shops). After the usual exchange of pleasantries, I decided that I would purchase something for breakfast. I usually get the house-made black pudding, but I noted an anomalous pudding in the display case: 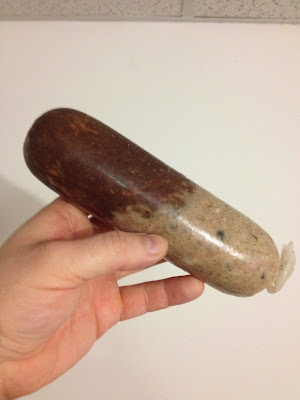 This anomalous pudding was made from the tail ends of the butcher's black pudding and his white pudding after he'd packed the casings. I prefer the black pudding to the white pudding, but sometimes it's nice to have both, without having to buy two puddings. Balance is important, isn't that what the Yin-Yang symbol teaches us?

Only if there's a wooden stick in it.