So, today marked the end of a Mayan "long count" calendar, which was supposed to mark the end of the world. Yet again, the doomsayers dicked up. What went wrong with this new-agey take on eschatological yearnings?

According to Mesoamerican cosmology, the current age is characterized as the fifth age of the world (I'm going to take this opportunity to plug Earl Shorris' wonderful novel Under the Fifth Sun here... and I just found out the Mr Shorris died this year). The fifth iteration of the world began when the fourth world was destroyed by a flood. The third world was destroyed in a rain of fire, the second world in a series of windstorms. The first world was destroyed by an infestation of jaguars... this is the particular destructive event which is of most interest to me.

In order to ascertain the occurrence of world-shaking destructive events, one must look for evidence in the geological record. Evidence of the causes of mass extinctions can be sussed out... a thin layer of a rare element or igneous deposits suggesting violent vulcanism hint at events of world-shattering violence.

While evidence of worldwide floods, wildfires, and windstorms is hard to distinguish from evidence of localized floods, wildfires, and windstorms, evidence of a worldwide plague of jaguars should be relatively easy to find. In fact, there should be a thin layer of jaguar remains distributed worlwide in the proper geological strata. In the tradition of fine scientific illustration, I present to you an artist's representation of this "jaguar belt", so called: 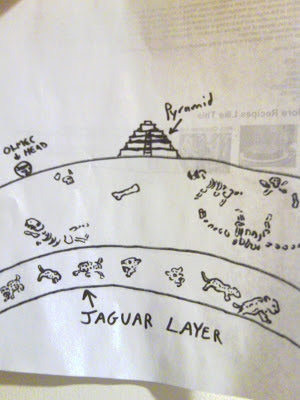 While evidence of this worldwide jungle cat-astrophe has not yet surfaced (I am currently seeking donations to fund my research efforts- just leave a bag full of money in the hollow beech stump near the south end of the pond at Tibbets Brook Park in southern Yonkers), there is evidence that a large, rambunctious tiger knocked down trees over a large area of forest in eastern Siberia, this occurrence is known to researchers as the Tigriska event, but the foremost authority on the subject is being coy.

In the interests of full disclosure, my researches into the worldwide jaguar apocalypse would never have been possible without a firm grounding in the work of Professor Cezar Golescu, whose studies linking the indigenous peoples of the Americas to the lost continent of Mu have been invaluable. His knowledge of the Muvian calendar, a "fine watch of seventeen jewels", can help us puzzle out the failure of the current prediction of the end of the world.

In the meantime, there are other theories regarding the end of the Mayan calendar (hat tip to Thunder), or one could always ask the Mayans themselves. If you haven't made any plans for the weekend because you thought that the world would end, you can always read the Popol Vuh, the creation epic of the K'iche' Maya (Smut would chastise me if I didn't mention that "Popol Vuh" was also a spacey Krautrock group, or a Krauty spacerock group which had the same inspirational relationship with Mesoamerica as Hawkwind had with Melniboné). Barring that, one could always watch Patricia Amlin's gorgeous animated Popul Vuh, posted on this blog at an earlier date:

I wonder if there was a jaguar volcano, or perhaps a jaguar meteor?
~

this "jaguar belt"
I assume it is clasped with a jargoon pard.

a large, rambunctious tiger knocked down trees over a large area of forest in eastern Siberia

I wonder if there was a jaguar volcano, or perhaps a jaguar meteor?

I'd really like to be a part of group where I can get responses from other experienced people that share the same interest.

Oooh, sounds spicy... there's a "no tell motel" on Tuckahoe Rd- maybe we can meet there around midnight for a discussion of our mutual interests.

I assume it is clasped with a jargoon pard.

This merits some further study- maybe you could chair the Department of Applied Tigristics.