There's a fine line between hilarity and horror, and that line was crossed and re-crossed when Republican representative Clay Higgins of Louisiana claimed that his wife had predictive powers: 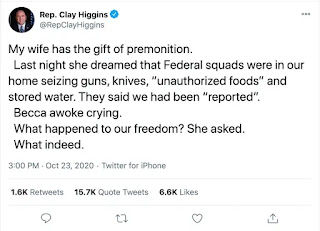 I don't know what unauthorized foods are, unless Clay keeps kosher, which I doubt.  He could also avoid having his knives seized if he stocks up on thirty or forty plastic knives to hide around the house and yard.  What kind of survivalist nutjob is he, anyway?

I don't believe in precognition, perhaps because I became familiar with the work of the late, great James Randi early on.  At any rate, there's no way that Mrs Higgins has the gift of premonition... after all, she married a thrice-divorced whackjob like Clay.

Post title taken from the classic essay on the usual fate of eschatological cults- perhaps the only sociology essay mentioned in a Blue Öyster Cult song.

So Clay reached over to his loaded AR-15 which he keeps next to the bed, handed it to Becca saying "Here honey, this will make you feel better". Becca lay back down cuddling the rifle and was soon comfortably fast asleep.

"Unauthorized foods" would have to be meat made out of trafficked children. Not that I'm implying the Rep. Higgins and his wife eat babies. They're probably just holding the butchered children as evidence. But that does help to explain all those knives the Federal squads were able to seize.

Yours crankily,
The New York Crank

More Tales from the Crypt in Gooperland . . . When I read this Nazi phony pillow talk all I could think of was that moment from 2009 when some woebegone hausfrau at a white nationalist pity party (formerly known as a town hall) wailed into the mic and wailed, "I want my country baaaaccccckkkkk!"