Three years ago today, the weirdest conspiracy theory I have encountered, which is more like a conspiracy aggregator which can absorb other conspiracy theories, was birthed.  The first prediction was  ambitious. predicting the fall of the right-wing's most hated figure, but not auspicious, having not come to pass in the ensuing three years... oddly enough, the first 'Q Drop' was actually a response to another 'insider anon' on 4chan: 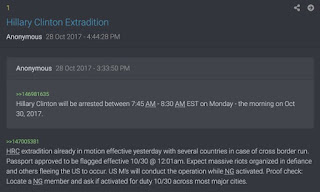 Apparently, it was common for various shitposters to claim inside knowledge about intelligence or law enforcement matters, and would engage in games of one-upsmanship.  Oddly enough, the shitposter who came to be known as 'Q Clearance Patriot' beat out other figures such as 'FBI Anon'.

The QAnon phenomenon had its start on 4chan, but migrated to the even more problematic imageboard 8chan (now rebranded as 8kun after several mass shooters posted manifestos on the imageboard).  The poster(s) known as Q painted themselves into a corner by claiming that no other sites would be used for communiques.  That's a total genius move by a 'team of high ranking military intelligence operatives'.

Most of Q's drops in the first couple of years consisted of cryptic missives written in a mix of jargon and code that functioned as an Alternate Reality Game for believers.  They could decode these 'drops' and compare notes to piece together a narrative, which typically involved the arrest and trial by military tribunal (followed, naturally, by execution) of high-ranking Democrats.

QAnon is really the Unified Field Theory of conspiracies, capable of absorbing other conspiracy theories.  Elites drinking the blood of children to get high and regain their youth?  Check!  Aliens manipulating humanity behind the scenes?  Welcome aboard!  Mole children raised as slaves in underground military bases?  You got it!  JFK Jr faking his death to fight Hillary Clinton?  Yeah, there's a sect for that.  The one thing that unifies the true Q believers is the belief that Donald Trump, the most corrupt person to occupy the White House, and a man credibly accused of being a sexual predator, is humanity's last hope in the war against the sinister cabal that rules the world behind the scenes, employing most of Earth's people as cattle to prey upon.  Yeah, it's pretty much Cult 45, seasoned with more than a touch of antisemitic Blood Libel.  I have to confess that the whole rigmarole fascinates me, but then again, I am a huge fan of Foucault's Pendulum and Illuminatus!

If you're unfamiliar with this conspiracy complex, a good place to familiarize yourself with the basics is the irreverent QAnon Anonymous podcast, and a real thorough debunker of the whole mishegas is Mike Rains, who posts as Poker and Politics (he probably knows the 'comms' better than anyone).

It's been three years since the first prognostication by Q was made, and it still hasn't come true.  Next week, the God Emperor that the Q-loons worship stands a good chance to lose the presidency in a landslide.  I don't think that will end the QAnon phenomenon, most cults survive failed prophecies.  What the movement morphs into remains to be seen, but watching the phenomenon unfold over three years, I have the distinct feeling that I was watching the birth of a new religion in realtime.  Who the hell knows what it'll morph into over the next three years?

I was more struck by the intersection with Prague Cemetery, the last few years have struck me as Eco channeled by Ed Wood, but with worse special effects.

Oddly you can find a reference to rehashing outrages in The Name of the Rose too. This blood libel stuff is simple easy to use and apparently it can be used again and again and a significant portion of population never works it out.

I assume the same group doesn’t believe in evolution, because there doesn’t seem to be any selective pressure against that kind of stupidity.